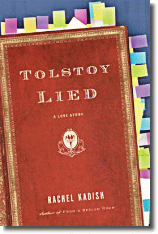 I lingered with this book–Tolstoy Lied: A Love Story by Rachel Kadish–reading it for more days than what I usually spend with a book. Mostly because real life was exceptionally lovely. Am I gloating? Yeah, I guess. Anyway, I liked this book. I liked this book in a way that it was a pleasant couple of hours over a course of a couple of days, but it didn’t rock my world. Which is bad because I really wanted this to be the love story it promised to be. Oh, an unromanticized one, yes, but, really, I wanted so much from Kadish. You understand, don’t you, after a couple of weeks of reading chunkers about what a saaaaad thing love is?

Tracy Farber is a thirty-three-year-old English professor, awaiting tenure, at a Manhattan university. She “[sits] among books all day, lecture from them, underline their pages emphatically.” Which makes her a qualified professional to kick Tolstoy’s dogma in the gut, that which says Happy families are all alike; every unhappy family is unhappy in its own way. It’s a lie, Tracy tells us–and she’s setting out to prove that: one, by making a [book] project about it and second, but only incidentally, living a life disproving Tolstoy.

See, she’s put dating on hold–“My dating slowed to a trickle a few years ago, mostly because I didn’t cultivate it. I decided I didn’t want to be a collector of people or grudges.” Besides, it’s not so bad being a single career woman in Manhattan–think Sex and the City with no Manolos in sight, and faculty meetings instead of cocktail hour.

And then she meets George, in a first-meeting-scene that rivals any romantic comedy scene I’ve ever encountered (boring party, drinks flying, charming guy with big hands). In fact, this is a novel whose characters we’ve all seen before: the ambitious single woman who’s not really looking for love; the gay colleague; the love-rabid friend of nineteen years; the friend heavily pregnant and giddy with it; that friend’s rascally younger brother; the bitchy colleague; the nerve-stricken genius of a grad student; the nosy department secretary; there’s the ex-boyfriend whose heart the MC broke, but never actually becomes an actual character, just a specter summoned when it needs to be proved that Tracy isn’t so good at this whole love thing. But kudos to author Kadish for saving them from that cesspit of cliches by transporting them from your usual cliche-hangouts to, well, intellectual Manhattan. It’s an intelligent novel, with intelligent characters–but sometimes I think that cliches happen eveywhere, no matter how many PhDs a city may have. Get what I mean? That Kadish got away with it because they’re supposed to be smart, and this is supposed to be a smart novel about smart people?

[1] The prose is flawless. Kadish gets away with Tracy spouting lit crit in between interior monologues, because, after all, Tracy is an intellectual. There’s a tendency for quotables in this book, which makes my highlighter very happy indeed. Verra nice, lassie. Look:

People look alike when they cry. Faces naked, thrust forward, each ragged breath a question. The younger women give in most easily to the messiness of the production, honking their noses and letting out peals of anguish. When the worst is past they blink at the bright cafe with puffy eyes. To watch them come back to themselves–to hear that first muffled giggle–is to witness the return of expectation. Sometimes the men cry too, their heads absolutely still–a discipline requiring untold effort. They don’t use tissues, only the backs of their hands, and they never look in the cafe’s many mirrors when they’re done: if you don’t acknowledge tears, they aren’t real. (p.11)

At times, the language feels like an academic exposition. But that’s easy to forgive; eventually I figured out it’ll be easier to consider the novel as a treatise on what contemporary loving is:

Love isn’t rest. Love requires you, from time to time, to rip up your soul and replant it. To dare your lover to do the same. To muster sympathy where it seemed impossible. To be, perpetually, two kids joining hands, drawing breath, and deep-diving. (p.311)

[2] As I’ve said (and this book cannot stress enough) that Tracy Farber is an intelligent heroine, an intellectual as that, but as emotionally flawed as the next guy. I got a kick out of the namedropping and the litdropping. Tracy’s expertise is American twentieth century. However, you get the impression that Tracy doesn’t read contemporary literature. She’s always thumbing through classics and canon. Is this, oh English professors, the bane of your professorial life? No Stephen King to be sneaked in between grading papers and making notes on the margins of the books of long-dead people?

[1] It’s either an incredibly ironic novel in its self-awareness, or it just didn’t think itself through, or it turned tail on its own supposed daring and ran. From the very beginning of Tolstoy Lied, we know what Tracy’s stance is on the rabid disapproval of happiness there is, that longing to get joy the respect it deserves:

For a people who claim to want happiness, we Americans spend a lot of time spinning yarns about its opposite. Even the optimistic novels end the minute the good times get rolling. Once characters enter the black box of happiness, no one wants to hear a peep out of them. (p.04)

But then Tracy zooms through that box of happiness when it comes to her relationship with George. Oh, we see how in love they are, how at ease–but at the beginning. Of course something wrong happens, of course–but I wanted the novel to linger over the happy parts–isn’t this what we were promised? But, as Tracy herself says a couple of pages from the end of the novel, “The work of repair is not interesting” (p.312). Which is too goshdarned bad. Is Tracy Farber all bluster? Doesn’t she, for all her lauding of the ignored value of happiness, contribute a lot to the avoidance of her own happiness? There, Tracy, I said it!

[2] External plot–in this case refers to everything that doesn’t concern Tracy and George–could get annoying. But isn’t love full of external plot? Is this what Kadish wants to let us know? Gah, we’re all more fucked than we’ve been led to believe. The exploits of her advice-seeking, and the back stories of her friends, and the infernal, annoying issues with those faculty politics? GAH.

Tolstoy Lied promised me something. There it is–a love story, right on its cover, its title. But despite its premise–or, perhaps, because of it–the novel spends a lot of time dwelling on unhappiness and disappointment and petty intradepartmnetal politics. Huh. Of course. Because the literary world won’t respect Rachel Kadish any other way, right? Boo. Step up and own up, I say.