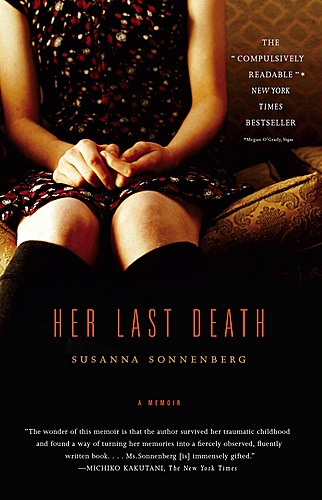 This will be a zip through the book—and, don’t get me wrong, it was hella good—since my brain’s still partly on hibernate. Still.

Her Last Death begins as the phone rings early one morning in the Montana house where Susanna Sonnenberg lives with her husband and two young sons. Her aunt is calling to tell Susanna her mother is in a coma after a car accident. She might not live. Any daughter would rush the thousands of miles to her mother’s bedside. But Susanna cannot bring herself to go. Her courageous memoir explains why. // Glamorous, charismatic and a compulsive liar, Susanna’s mother seduced everyone who entered her orbit. With outrageous behavior and judgment tinged by drug use, she taught her child the art of sex and the benefits of lying. Susanna struggled to break out of this compelling world, determined, as many daughters are, not to become her mother. // Sonnenberg mines tender and startling memories as she writes of her fierce resolve to forge her independence, to become a woman capable of trust and to be a good mother to her own children. Her Last Death is riveting, disarming and searingly beautiful.

I find it difficult to write my thoughts on Her Last Death, a memoir by Susanna Sonnenberg, without mentioning the writer’s mother—who is, after all, the crux of this book. The memoir revolves around her as her daughter’s life does in the years described and retold to us. This is a life foreshadowed by another, a life defined by how one is defined by one other person. Don’t get philosophical on me and say that That’s life tough luck let’s get ice cream. Susy’s mother is a natural phenomenon, a disaster most of them, as crazy a mother as I’ve ever heard of. And she’s a real person. It was annoying, it really was. But it’s not the book I am mad at, it’s Daphne. At all stages of Sonnenberg’s life, there Daphne is, kind, generous, lying, cheating, shoplifting, taking drugs, hysterical, sentimental, histrionic, sick, dejected, jealous. That’s what makes this so hellish, so admirable. Despite the high-end lifestyle, the potential for a fairytale, this are flawed women, and you’re left wondering if they did it to themselves or to each other, or whether this all had to happen because one is someone’s mother, one is someone’s daughter.