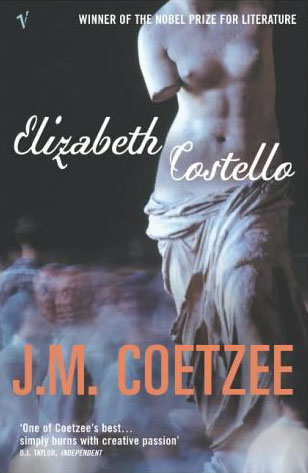 I suppose this calls for a new category, Stolen From Kael. Elizabeth Costello by J.M. Coetzee is yet another book I filched from my friend Kael’s own TBR Land Mass (and he takes this literally—with no shelves, his bedroom is overrun by books).

I have read Coetzee before, for a class that focused on Non-Western Lit, the connotations of “Non-Western,” of course, applied to books and authors, that were non-mainstream—basically, not from America and Britain. We had to read Age of Iron (as we considered, for the purposes of the course, Coetzee to be a South African writer), and I hated it—maybe because it was for class (but I don’t think so), maybe because I really just didn’t get it. I hated what’s-her-name, and all the other characters. That’s what I remember, hating that book. I hated that book with a passion brought on by an experience completely devoid of passion. (I lost that book in the typhoon-duet a few months back; I do not grieve.)

But here I am, reading Coetzee again. I’ve heard many things about Elizabeth Costello, good things—like, a lot of writers consider this to be his best book, hand in hand with Disgrace (which I have not read, and may not ever)—and it was when I finally had the book in my hands, and reading the blurb, that I suspected that I just might like this. It’s about a writer, an iconic one. And there is nothing a concept more narcissistic than someone who writes reading a novel about someone who writes.

It seemed I was off to a good start.

And then I actually sat down and read the book.

About fifty pages into it, I had the impression that Coetzee was just telling us, in this roundabout way of The Novel Disguise, what his own poetics were—on realism, on the novel in Africa, etc. See, normally I like devouring these “Writers on Writing/Literature” kinds of things—I’ve read James Wood’s How Fiction Works (despite many of its dissenters), a couple of books on the “Art of” series edited by Charles Baxter, and hell, even Time and Narrative by Paul Ricoeur. So I really wouldn’t have minded if Coetzee just gave me a clear-cut treatise on his poetics, and what he thinks of the issues relevant to his writing.

When he put all that into a novel, it was just so tedious, I wanted to weep. It inevitably became a question of trust. That is, that contract between the novelist and the reader was tainted with a ton of suspicion. I would always suspect that this wasn’t the character’s poetics, but Coetzee’s. There were speeches galore, acceptance speeches, introductory speeches, debates in public places that doubled as speeches. I never doubted whether writers actually do talk and act like this. What just irked me was that Coetzee would have made it all easier if he just presented me a book of essays.

Perhaps he doesn’t know his poetics yet? That he needs to use characters in a novel to flesh them out? And it doesn’t even matter if it’s the characters’ poetics or not—the characters didn’t exist for me, they were flimsy facades that merely acted as conduits for what the author wanted to say.

The novel is basically a chunk of authorial intrusion. I suppose it is admirable that Coetzee is exploring his writing this way, that the novel was created in this form. Even the structure of the novel hinted at a calisthenics-y, meta-fiction kind of thing. The omniscient narrator stepping in and telling us about skipping a couple of hours because it wasn’t important to the storyline, yadda yadda. There is a certain bravery to acknowledge to a writer (not even the narrator—but the author) who lets his presence be known in his work. It’s saying, Hell no—I’m not dead.

But what I found problematic was that Coetzee wasn’t inviting us into the novel. It’s not exactly a hoity-toity-ness attached to This Is A Novel Of Literature. It’s more of, well, a distressingly insular and pedestalic characteristic over the entire piece, an upsetting and insulting impersonalness. Add that to the fact that I didn’t trust him at all, and I paused in reading this book several times—before I found a way to read it, without actually reading it. There already wasn’t any emotional involvement on my part—the break-up wasn’t as hard as one would imagine. Haha. Hah. Fail.

See, what I realized was, even if he was insular and pedestalic and impersonal and hoity-toity but in essay format, I wouldn’t have minded. But this is a novel, and I am a reader who puts a lot of faith in the reader-story relationship.

I found myself skimming the book for more of those poetics. [And then I skimmed through those poetics when I was asking myself, Why am I even reading this?] That I stopped caring about the characters and just wanted to jump to what they thought of what literature was. Elizabeth Costello who? I know you by your poetics, by what you write—and wasn’t that what Coetzee was getting at? That poor Elizabeth Costello’s caught up in her revered and musty fame that no one knows who she is? Bah.

And soon, yes, even I gave up on those poetics, those lectures, those speeches. Which brings us to yet another problem I found with the book—what I find so disquieting is that there is no passion whatsoever to these supposed celebrations of the written word, and all these literary phenomena they’re trying to dissect. Come on, people, the waiter in our local watering hole has more fire in him when you prod him about Angelo Suarez or Patrick Rosal. I distrust people who can talk at length about the workings of literature and how they fit in to it, but can’t make the smallest impression on what they’re visceral response to their own art form is. Do you love what you’re doing? Do you want to rip your hair out? Do you talk at length of your poetics because you don’t want to think about the more emotional aspects of your art? Why don’t you just say so? I’ll even buy you beer, and pay for the cab fare home.

It’s almost like Coetzee didn’t want me to read the novel. Or is hinting that maybe I’m too, I dunno, too un-learned at this point to appreciate its fine insight and spectacular craftsmanship. [Sarcasm alert, over thar.] I’d read you again, though. Wait until I’m an Elizabeth Costello myself, and we’ll see, we’ll see. [Evil laugh.] Aherm.

What, Costello-Coetzee, were you trying to tell me?