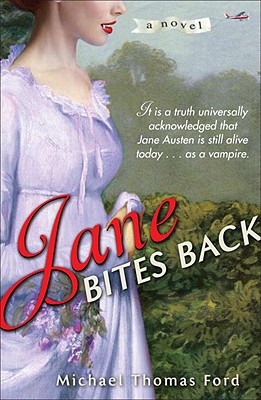 This might have to be the most ridiculous mash-up of genres I’ve ever come across–and goodness, but I enjoyed it. Kind of. Although at times it threatens to get crushed under the weight of its own tongue-in-cheek kitsch-ish world (but that’s what’s so fun about it!), Jane Bites Back by Michael Thomas Ford proves to be, ultimately a fast and entertaining read. It’s impertinent when it needs to be (and then some), and–off the top of my head–features one of the best final showdowns evahr.

Two hundred years after her death, Jane Austen is still surrounded by the literature she loves—but now it’s because she’s the owner of Flyleaf Books in a sleepy college town in Upstate New York. Every day she watches her novels fly off the shelves—along with dozens of unauthorized sequels, spin-offs, and adaptations. Jane may be undead, but her books have taken on a life of their own.

To make matters worse, the manuscript she finished just before being turned into a vampire has been rejected by publishers—116 times. Jane longs to let the world know who she is, but when a sudden twist of fate thrusts her back into the spotlight, she must hide her real identity—and fend off a dark man from her past while juggling two modern suitors. Will the inimitable Jane Austen be able to keep her cool in this comedy of manners, or will she show everyone what a woman with a sharp wit and an even sharper set of fangs can do?

I suppose I have to throw in the disclaimers: 1] As some of you may know, I am extremely skittish of Jane Austen; 2] I am mad for Charlotte Bronte, and Jane Eyre, and have been in love with Rochester since I was nine. Huh. Disclaimers aside though, I was incredibly intrigued by the premise of Jane Bites Back. For one thing, it didn’t turn Darcy or Elizabeth or Fanny or whoever else into vampires–it is not a paranormal follow-up to any of Austen’s works–it turned darling Jane herself into a vampire. I mean, come on, that sounds like a lot of fun, okay?

1] The novel’s highest points are when Jane [Austen] Fairfax expresses her ire about the workings of the publishing world–what’s with all the goshdarned spin-offs about Austen, Austen’s work, the people who’ve read Austen’s work? What’s with the cookbooks, the self-help guides, the work-out manuals (harhar) that’s attached themselves to Austen’s name? It’s a very tongue-in-cheek critique of the AustenCraze trend–after all, isn’t this novel a product of that very trend? The novel succeeds in walking that fine line between laughing at itself and, well, laughing at itself pathetically.

2] It thrilled me that Jane’s had 116 rejections over the years (because I have a black heart that way). I mean, that’s freaking funny, okay? Arguably (and I will argue, har) one of the most well-known and well-loved novelists of all time hasn’t seen a glimmer of a royalty check (the pains of being undead to witness it all), and can’t even break into the publishing world that’s going crazy about her. That–that’s just, well, funny.

3] Byron is a vampire. One more asswipe than Broody McYummy, but he has his merits. Also, there is no end to the Charlotte Brontë hate. Come on, people. Anyhoo. What I’m trying to say is, well, if you go nerdy for the literary name-dropping and asides like I do, this’ll be an enjoyable read.

4] Ford (Thomas Ford?) keeps the pace fast–he plunges us right into the fact that Austen is a vampire, and yes, she’s a bookseller, and yes, irony of ironies, she’s a frustrated writer in these contemporary times. The author knew how when to push the whole suspension of disbelief gimmick, and knew when to stay still and linger over details (like, well, Jane’s pressing “real” life.)

2] I think it was my recent exposure to the Molly Harper books that I felt a little disappointed by how I was hurtled through the mythos of the whole vampire schtick. It was just, kind of, well, convenient. I needed more than hazy flashbacks and angsty dreams.

3] The book is hefty with plot but the character development’s a bit underwhelming. The characters felt hollow, several felt flat–sidekicks were sidekicks, love interests were love interests, dangerous people were dangerous people, crazy people were crazy-ass people. Although it was the plot–and Ford’s storytelling–that kept me reading, I just wished the novelty of it all wasn’t at the cost of well-written characters.

>>> All in all, it was an enjoyable, fast-paced read. I wanted more from it, but I do applaud the author for living up to the expectations the actual novel set for him–it’s not very pretty when a tinge of satire turns into a bloody mass of ouch. (I don’t know where that came from.) Still, I liked the book enough to look out for the sequel Jane Goes Batty–yep, it’s a series. I want to know what happens to Byron, and Lucy, and Walter, and, of course, our darling Jane Fairfax. I had fun with the mash-up, and can’t wait to see what literary figures Ford throws into the mix.

I mean, the entire novel basically screams, “Why the hell not?!”

6 thoughts on “marginalia || Jane Bites Back, by Michael Thomas Ford”