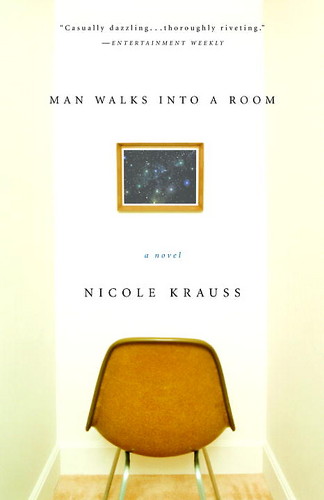 I post my thoughts books I’d read under the category Marginalia—and that’s what most of it is, my notes about a book (scribbled on the margins or not), questions I pose to myself, quotes that made my heart flutter. For the blog, I summon my English 101 skillz and attempt organization and a coherency.

For this post, I’m letting you in on the blathering all over the pages of Mini-Red-Moley. The following is as it appears on my notebook (with only a few changes for formatting’s sake):

– a novel by Nicole Krauss

His belief in his past life was polite: the kind one manufactures when in conversation with the faithful.

At first, it wasn’t that engaging: I flipped through the pages because I was promised (by hype? by praises sung? by my experience of her second novel, The History of Love?) that this would be a great read. Samson has been found in the desert, with no memory of who he is. A brain tumor lodged in his, well, brain. With the removal of the tumor, the removal of twenty-plus years of Samson life. Though he retains memories after the surgery, all he actually remembers stops at his twelfth year.

Dude’s got the memories of a twelve-year-old, but the sensibilities of a grown man. I am confused. Isn’t memory supposed to make us? [From a Philo reading, by St. Augustine—“I had become to myself a huge question” and “Nothing defines me more intimately than my memory… how then can I not only forget, but (and how would I know it otherwise?) remember that I have forgotten that which I have, nonetheless, forgotten? How do I remember that I have forgotten what I no longer remember? …Thus there remains for me nothing else but to admit that I have kept in memory the image of the forgotten, but not that which I have forgotten… Thus if my own memory renders me a stranger to myself, how could I not also become other than myself in the experience of my will?”]

Samson and his wife Anna. It gets good around page 38. An examination of relationships, how Samson deals with his memory loss by resolutely walking away from what he has forgotten. BUT. I thought this was going to be just that—an insular novel about memory and loving. And then, well, it got science-y. Samson has become part of this radical project—and the science is hokey; we are told the wrong things. My interest wanes, but I am attached to Samson now, his character, his sensitivities.

I’d wondered about point of view: why it’s Samson who has to tell us his story, why not Anna? The genius—and the bravery—of the decision stuck to me: here is a man who had a gaping whole in his own narrative—and isn’t our narrative largely concerned with our memory?—and Krauss has given him the responsibility of telling his story.

♦ I’m halfway through the novel. Samson has to be the one telling his story. This has gone beyond the heartaches between him and his wife Anna: this is him stepping inside his mind.

Billions of binaries, one or zero: simple as that. Like a game of Twenty Questions, an endless series of deductions performed to break down the world into its smallest parts. Are you Samson Green, one or zero? Is this your wife, one or zero? Do you love her? One or zero. We repeat the question: Do you love her, one or zero? The subject appears to be having difficulty answering. Is this a difficult question, one or zero? Until the world is reduced to math and all the equations equal zero, and in the tremendous silence of that final moment they ask in a trembling voice, the only ones left: Does the world exist? One or zero. And the answer comes back, though there is no one left anymore to hear it, the digits on the clock rolling back to start again with nothing.

♦ Every person Samson meets is mysterious: Lana Porter, Ray, Donald, even his wife. Not just how Samson relates with them (or related with them), but these people’s intentions. Does Samson’s almost-blank slate lend this mystery and ambiguity to most things?

♦ Donald and Samson are in the desert. I like Donald, he’s the least malevolent character I’ve come across. And he’s funny. – A beautiful quote:

He watched the old man sleep and felt the vast loneliness of the world, the loneliness passed from person to person like a beach ball at a rock concert, kept aloft at all costs, and this was his moment to shoulder it. Or maybe it was his own personal loneliness, a solitary, errant longing no one else could ever know, and the knowledge of this stoked the already existing loneliness, made it widen and blur at the edges until it included everything.

♦ More on memory (Samson reflects on how he could not remember his mother’s death, how his mother was suddenly lost to him)—this quote reminds me of Kael’s poetry:

To touch and feel each thing in the world, to know it by sight and by name, and then to know it with your eyes closed so that when something is gone, it can be recognized by the shape of its absence. So that you can continue to possess the lost, because absence is the only constant thing. Because you can get free of everything except the space where things have been.

♦ This novel is getting out of control. The project, the memories, a lot of strangers, a pointless drunken quest to retrieve slides? A lot of searching. But I’m getting exasperated—this part of the novel has so many moments that are so stunning, but they don’t belong in the actual novel. They’re better than the actual novel, which has disappointed me (in general). So disquieting.

But, as I remember from my experience with The History of Love, the ending left me unsatisfied. Or perhaps the better word would be “bothered.” Resolutions aren’t that important in Krauss’ novels—not answers, not explanations, These are examinations, this meandering conclusion. Something bothers me about Krauss’ voice. It’s too there, for one. She’s too aware of her lyricism. In her second novel, this poetic tendency is tempered, more seamless.

Still. A tender anthropology, this Krauss.

I wonder if I’d been happier if Krauss stuck to that insular story. But I do know I’m pleased that this was her first novel—she got extremely better with her second one. I’m waiting for her third.

13 thoughts on “marginalia || Man Walks Into a Room, by Nicole Krauss”