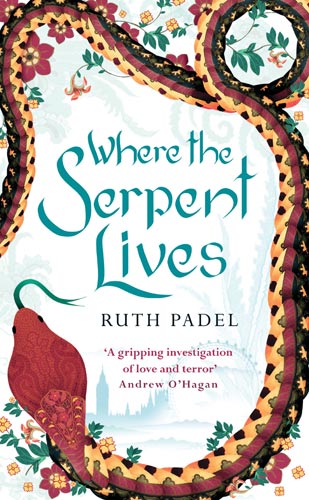 Another book that really could’ve been great. I am very much beginning to feel like an ogre, what with the books I’ve read and reviewed this March.

Yet another debut novel: Where the Serpent Lives by Ruth Padel could’ve been, if not great, then good enough, a respectable first venture into fiction. But it’s an ambitious novel that fails. There’s no doubt where Padel’s talents lie; Padel–who happens to be the great-great-granddaughter of Charles Darwin–turns her narrative eye to nature, assigns her lyricism to the plights of the jungles of India and the odd badger in England. So much vividness in her exploration of ecological issues, the characterization of animals here and there.

However, I couldn’t help but feel that these were the superior characters in the novel–Padel’s humans leave a lot to be desired. Credibility is one of them. Actual personalities, another.

There’s a sacredness to the depiction of nature. Some rare and secret thing we’re let in on when we slip into the mind of a snake or a fox. But it all gets humdrum and stereotypical with people. There’s Rosamund, around whom the novel centers on, the annoyingly long-suffering wife. There’s Tyler, “charismatic” when you ask the blurb, “Type A douche” if you ask me. I will elaborate on this later on, but man, this guy is a dick. What else? There’s the uncommunicative teenager, the estranged father, the guy who was once in love with Rosamund, the random friend–and let’s not forget the tender-hearted Croatian mistress.

I am not exaggerating. This book points at a depressing lack of imagination when it comes to the human characters–considering they’re what the novel is about, the animals only scurrying in and out of the picture. The human beings have no complexity in them. They don’t have to be likeable, they just have to be real. And the author has to do that for us readers. Padel, sadly, doesn’t.

Yes, another book I’d skipped to the end. Because, frankly, it was getting ridiculous. First the characters angered me–I can be judgmental, har. And then they annoyed me. And then they just had me gaping in shock and pity. And then I didn’t care.

[Augh. And the sex scenes are particularly horrid. Caviar and nipples–hell, anything to do with crass and smarmy Tyler is EW.]

The book’s end is crammed with the credibility I was looking for. Or attempt of. It was really too little, too late. The novel spent 200 pages detailing what an insufferable group of people these are, and a couple of pages to the end we’re told Oh, not really? I am not buying it.

Now. If anyone wants my copy of the book, raise yer hand, and I’ll toss it your way (maybe loyal fans of Padel’s poetry and nature writing?). Because it will not be loved where it lies in my bookshelves.

5 thoughts on “marginalia || Where the Serpent Lives, by Ruth Padel”