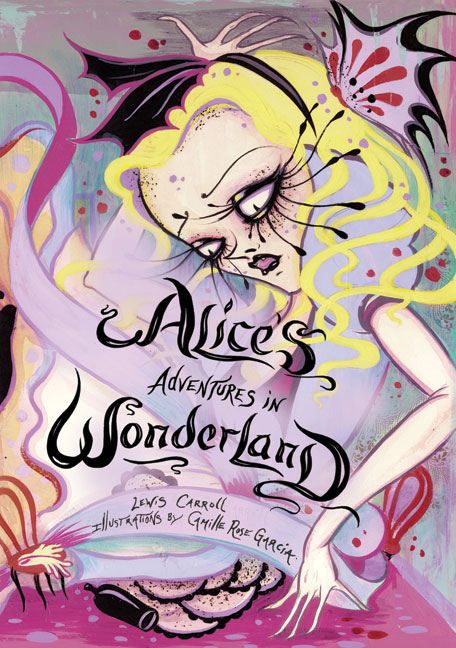 ZOMG, you guise—it’s Alice’s Adventures in Wonderland, by good ol’ Lewis Carroll, with shiny illustrations from Camille Rose Garcia. It’s fast become one of my prized books—never mind that The Boyfriend, a Lewis Carroll fan, is plotting to steal it from me. [I received this lovely edition from a contest at Book Club Girl—along with a tote bag and a signed lithograph of the cover image. It’s so pretty. And pink. And sinister. And pretty—the pages so glossy and yummy, and that new book smell, and that new book smell peculiar to art/design books. HarperCollins has allowed y’all to take a browse inside, if ye’r so inclined. It’s gorgeous, okay?]

What I know of Alice comes from the Disney version; that more faithful version starring Miranda Richardson as the Queen of Hearts and Ben Kingsley as the Caterpillar (my favorite of the Alice movies); and Tim Burton’s sequel/spin-off thing. I know Alice, and the cast of characters that abound in Wonderland—but I have never gotten to know her, and the place, firsthand.

I wanted to experience Carroll’s prose, his language. And so out came the book from its protective bubble-wrap. And so I read Lewis Carroll. I encountered familiar figures with a different lens. I encountered creatures I hadn’t experienced before, and once in a while, muttered, “Oh, so that’s how it goes!”

…this curious child was very fond of pretending to be two people. “But it’s no use now,” thought poor Alice, “to pretend to be two people! Why, there’s barely enough of me to make one respectable person!”

It’s a surprisingly fast read—enjoyable, fun and, of course, absurd. It’s easy to be pulled along by Alice’s wonder and awe and active participation in things silly and occasional disdain for the creatures she encounters. I love Alice. I really do. She’s not dumbstruck by the things around her. She doesn’t keep telling herself that it’s all just a dream. She’s spunky and precocious. And, once in a while, we are reminded that, as a child, she is still incredibly vulnerable.

“Who are you?” said the caterpillar.

This was not an encouraging opening for a conversation. Alice replied, rather shyly, “I—I hardly know, sir, just at present—at least I know who I was when I got up this morning, but I think I must have been changed several times since then.”

Easy to notice early on that there’s a more sinister edge in Carroll’s story—I’ve always felt, even as a child, that Wonderland was whacked out, dammit, but Carroll’s prose (experienced firsthand) makes it realer, somehow. Scarier. For example, we all know that Alice grows and shrinks with every Eat Me and Drink Me that comes her way. And we’ve always seen her just grow and shrink proportionally. In the book, Alice’s body transforms in strange ways: her neck elongates monstrously that she is mistaken for a giant serpent, and when she shrinks, she is always in danger of disappearing entirely.

That is scary shit, y’all. 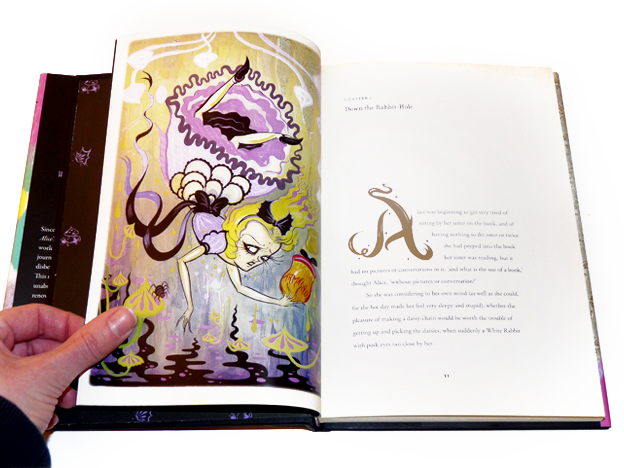 More on sinister-isms: Camille Rose Garcia’s illustrations are gorgeous, and psychedelic, and strange, and a little creepy. It was a wonderful contrast to Alice-the-Child. And I do confess that even though there were many opportunities for me to pick up Lewis Carroll, it was this edition that finally got to me. I like ‘em glossy pages. And I’ve discovered that it appeals to people who’d never touch “a musty ol’ classic”—friends want to touch it (harhar), and cousins are begging me to read to them, or let them take it home with them. So there’s definitely an upside.

Of course, I can’t wait to read Through the Looking-Glass—The Boyfriend has several copies of that, haha—and whatever else Carroll-Alice is out there. Plus, even though he also plans to steal Garcia’s lithograph from me, The Boyfriend has always liked the original illustrations. So that’s something to check out.

In the words of the Mock Turtle: “No wise fish would go anywhere without a porpoise.” And, yeah. I am so putting that on a t-shirt.