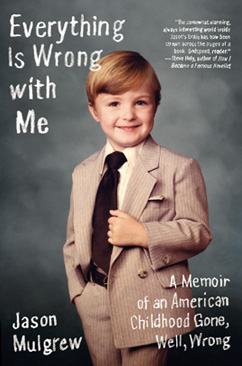 [And now, for something completely different–a break from the bleak and the pseudo-bleak.]

I do not know Jason Mulgrew, which, many might point out, is an oversight on my part. I did not know his blog existed, and only took a look-see after reading his memoir, Everything is Wrong With Me: A Memoir of an American Childhood Gone, Well, Wrong. I spent an hour or so back-reading and skimming, when I decided to stop. As Mulgrew’s traget audience seems to largely draw from readers of his blog, I figured I’d treat the memoir as a reader who, well, does not know about Jason Mulgrew. To allow the book to stand on its own, so to speak. We like things fair here at S&TS HQ.

So. Jason Mulgrew’s recounting of his childhood exploits–they made me laugh. Not uproariously. People didn’t swivel in their seats and crane their necks in my direction. I laughed, like, Heh, I saw what you did thar. The stories and the telling of the stories, witty and clever. Occasionally ridiculous. Overall enjoyable. Not as earth-shattering as I hoped it would be, though–but it’s a nice break from all the tragedy-centric shiz I’ve been immersed with. [For this respite along, I thank the book.] I read it one lazy afternoon, smirking and doing that Heh laugh here and there. I admit I skipped some parts–mostly when the sports talk got too technical [meaning, any discussion longer than a paragraph], but that’s the movement-aversive in me, Sedentary Sasha.

Mulgrew semi-details what it was like to grow up in Philadelphia, with a cast of manic characters and situations. See Mulgrew’s parents meet at a Mummers Parade, a double-flashback so strange it can’t not be funny. There’s an irreverent enumeration of the staples at your average Little League team: The Coach’s Son, The Eight-Year-Old Who’s Really Nineteen, The Eight-Year-Old Who’s Really Four, etc. A survey of the songs Mulgrew grew up with, and would forever remain near and dear to his heart, and a chapter where, with Jason having already submitted his manuscript, his father says, “Did I ever tell you about the time I got arrested for attempted murder?”

My favorite chapter–the chapter that I just laughed like silleh–would definitely be “My Bird: Inadequacy and Redemption.” Yes, Jason Mulgrew calls his penis the way a four-year-old boy calls his penis. Yes. Definitely enlightening, that part where Young Jason realized he was holding his, er, bird all wrong. When Mulgrew detailed the two important lessons he’d learned while peeing next to one Carlos Flores, that was when I could not stop laughing. When the bewildered Boyfriend turned to me, all I could say was, “He’s a pincher!” And when Jason went on to tell us what the hale was going on with Carlos Flores’, er, situation, that was when I kind of just lost it and went kind of catatonic.

I wish I could reproduce that entire chapter here. That’s how much I loved it–I am very much willing to break copyright laws, but just too sissy about it. But, no worries, I have made attempts:

. . . Carlos demonstrated to me that the “real” way to hold a bird was to cradle it in one’s hand, and not like the mother lion holding her weary cub in her teeth with her clenched jaw but (to continue with our wildlife kingdom analogies) more like a retarded boy handling a sleeping hamster–lovingly, and with a delicateness that is inspired by a complicated mix of fear, confusion, and awe.

I learn something new everyday. Don’t know when that’ll be useful, but I’m keeping it on file.

Carlos Flores had a penis the size of a table leg. It was giant, gargantuan. I did not then nor do not now have the words to describe it. It looked less like a penis and more like a weapon, like it had a purpose greater than peeing, like hitting Wiffle balls or knocking holes in Sheetrock. It needed a name, not a cute one like Mr. Willy or Captain Pee-Pee, but something like Max Strong America or James Bond Powerful Justice or God’s Tougher Friend Steve . . . Looking at it, I wouldn’t have been surprised if it took out a cigarette, lit it, and then asked me what I thought about that “anarcho-syndicalist bastard” Noam Chomsky before telling me I really needed to invest in a good pair of slacks. It was a force. It was respect, gentialized.

Pray, do not judge me–even though that I’ve had to retype this sentence over and over since I’ve been attacked by the giggles yet again. Ah, hahaha, that part about Steve. Haaaay.

Ahem. Where was I? Oh, yes. To business: The humor relies so much on the situations Mulgrew or the family got into in the olden days, and how they’ve scarred him for life. Humor likewise relies much on the tone Mulgrew uses to look back. Offhand, deliberately clueless.

And, yes, glibness runs through his reminiscences–it’s almost the motif for the memoir. Mulgrew is extremely conscious of maintaining this tone. See, there’s so much potential for drama, for the stuff of Memoirs, capital M–dysfunctional family complete with a not-quite-an-alcoholic father, as equally crazy relatives, growing up around stabbing and carousing and hustling. If you’re looking for a sober survey of an American childhood gone wrong, this is not it. Although the greedy little monster in me laments at what it perceives as waste of perfectly good material, Mulgrew is content to let things slide. He would rather not dwell–see his own muted observation about his nonchalance:

This may sound too cut-and-dried and it might make me sound closed off, but that’s how I feel. If you were to ask the eight-year-old version of me how he felt about his parents splitting, he would probably feel much differently from how I do now. My life is not defined by my parents’ ill-fated relationship, nor was my childhood defined by it. My life has been divided by it, meaning the history of my childhood is split into three parts: before the divorce; during the divorce, when we lived at my grandmother’s house for those two-plus years; and after the divorce. But ultimately, it is something that happened and it was something that was overcome.

There’s a conscious deflection of “actual” stories–of story stories–in favor of wringing a laugh out of the reader. It’s funniness over earnestness. Which, technically speaking, shouldn’t be a problem. Everything Is Wrong with Me does not aspire to be earnest, to serve up his dysfunctional family in a book-deal platter and have Oprah come knocking on his door. He knows the reader would flock to him for laughs. And though he doesn’t always deliver, I liked the book well enough–his is a laid-back kinda slurring potty humor, and–I say, yet again, do not judge me–I’m irrationally drawn to that. I mean, I’ve sporadically returned to his blog, killing time back-reading. I must say that his recounting of his adult life, in the this-is-funny context is more effective than his recounting of his childhood, what with his humor-as-smokescreen method. But, still.

I mean, come on, look at that fantastic cover. And, hell, that part about Noam Chomsky and the slacks. My god, the slacks.