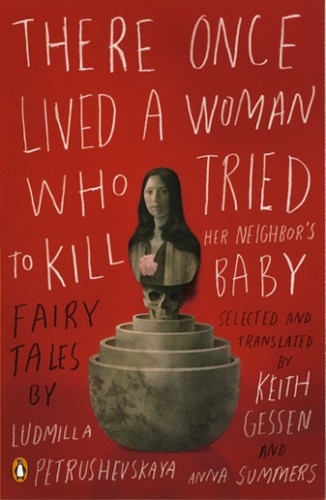 I don’t know when I first heard of the “scary fairy tales” of Ludmilla Petrushevskaya. I’ve seen the cover of her book here and there in the blogosphere [how could you forget a cover like that?]; and when I saw There Once Lived a Woman Who Tried to Kill Her Neighbor’s Baby in the bookstore, I only vaguely remembered James Wood liking it, putting it in his list of The Best Books of 2009. And, well, that cover, come on.

Where was I? Oh, yeah. Good book. Verra good book. Hee. Eherm. I love it. I did. You might be getting tired of me saying that–the Month of May’s just bursting with YayBooks, I’ve noticed. [Again, yay.]

Petrushevskaya’s tales–fairy tales, allegories, some just at the edge of horrific–are wonderful discoveries. Oh, macabre fairy tales. There’s a simplicity–a primality–to the terror I felt when faced with these fairy tales turned on their head. Stories from childhood that were meant to lull is to that happy widdle place at the cusp of sleep–completely shattered by blood and ghosts and starvation and burial and just goddamned scary shite. The stories are straighforward, unadorned. Very simply said. Which is more chilling because they point to rather dark things beyond our control, and, well, especially those things inside us, certain truths we can’t really escape.

But Sasha no longer came by, and Zhenya began to see that things weren’t so simple among people, that there existed a whole other secret, stubbornly flourishing animal side of life, where revolting, horrible things collected . . . [From “The Shadow Life.”]

I was sometimes inclined to read the tales as metaphor. In one of my most favorite stories at the collection, “There’s Someone in the House,” a woman suspects that there’s someone, well, in her house. And in a mental deterioration rendered so simply, so quietly, she proceeds to wreck her house, smashing plates and tearing curtains. And then, in a moment of clarity, she just stops, and begins anew to rebuild her life. I am allowed to see this as, well, as about depression. Some darkness that takes over us. And then, if you’re lucky, you live again. And you try to fix what you realized you’ve broken.

It had been so easy to destroy everything, and it is so hard to fix, clean, and order it again.

There are stories about revenge, of dead children, and, as in the title story, children neighbors plot to kill off. There’s plagues and illusory utopias. There’s a lot of sorrow, a lot of bad choices. But. As the translators-editors Keith Gessen and Anna Summers wrote in the introduction to the collection of selected stories, The greatness of Petrushevskaya lies first in her ability to convey the true, crippling power of despair, and then to find a reason to return. . . The tales are not necessarily moralistic. The stories are redemptive. A father, lost, returns, but not in a way that could be foreseen. A mother saves herself from the hounds of her family. Marilena, a prodigiously fat woman, finds a more hopeful future beyond simply splitting into two beautiful women at night. But I really do appreciate how they bring us to the depths of lonesomeness and sorrow and, yes, despair–but gives us a resolution that is not exactly a happy ending. It’s classic case of You Can’t Always Get What You Want, But You Might Just Get What You Need.

Ever since I started reading these fairy tales, I’ve been chanting the author’s name to myself at odd times of the day. Ludmilla Petrushevskaya. Lud-MI-lla Pet-ru-shev-SKA-ya. LUD-mi-lla Pet-ru-SHEV-ska-ya. And all the variations. Over and over and over.

[A terrible story: There once was a young lady who decided the cure for a crappy day was to blow a chunk of her just-received salary on books. She found Ludmilla Petrushevskaya. A lone copy on the shelves, the protective plastic covering falling apart around it. She went to Customer Service, and asked if there were any other copies. Because she was O.C. like that, y’all. Customer Service Lady–face caked with foundation, highlighting the moustache the fell over her lipstick-bleeding upper lip–tore off what was left of the plastic covering, and proceeded to tap the book against the faux-granite counter. CSL typed something in a rather archaic computer [green letters against a black screen, ack!] The young lady felt faint. CSL, waiting for archaic computer to get its bidness done, decided to see what the hell was so interesting about this lurid red book.

CSL opened the book. That is, she pressed her knuckles in the middle of the cover, and with her thumb flipped the edge of the cover aside effectively creasing the book forevahr. She peeked at the table of contents, never ceasing in her monstrous grip on the book. The young lady was torn between stabbing CSL and just running away with a wail.

Meanwhile, the archaic computer was beeping. CSL checked. And CSL, she said, “It’s the only copy we have left.” The young lady had no choice. She rescued the book, holding it between two other books, keeping it to her chest, and man, she wanted to kick something hard. You’ll be okay. There was an edge of hysteria to everything. That is, everything had that slightly yellow glow–or perhaps it was just the bookstore letting everyone not-so-subtly know that it was near-closing and the lights were turned low. I will take care of you. And she paid an obscenely amount of money for a damaged book, moved by equal parts hearsay, pity, and plain blind lurve. The End.]

17 thoughts on “marginalia || There Once Lived a Woman Who Tried to Kill Her Neighbor’s Baby: Scary Fairy Tales, by Ludmilla Petrushevskaya; selected and translated by Keith Gessen and Anna Summers”