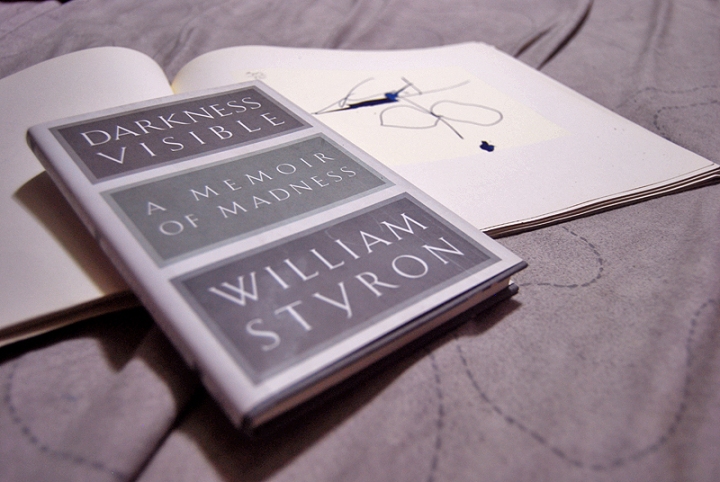 A few moments after I carefully peeled the protective plastic off William Styron’s Darkness Visible: A Memoir of Madness, I wrote in my notebook: I feel like this is going to put me in the wringer. Odd to hold a slim book in your hands and think, “This is going to beautiful that it might just cause me a lot of pain.” And, as with very good books, I forgot to take notes after that–Merely frantically sticking Post-Its to many of the book’s pages.

Yes, a beautiful book. Yes, a lot of pain came with it–the kind of hurt that comes from being witness to something so dark, so true and earnest. Almost plain-spoken, and all the more profound for it. Best book on depression I have ever read, and I’ve read quite a lot–All the more impressive, since it’s a short book. The focus, the honesty, the disarming lyricism, that constant rueful sadness–and, yes, redemption. There isn’t any attempt to glamorize or romanticize depression–Styron even reflects on centuries of artists who seem to be inexplicably blighted by the disease. A mix of personal defeats, friends, the writing life–and how one’s existence is just permeated with the darkness. And not once does Styron get whiny or uppity or all those other traps depression-memoirists seem to fall into [I am looking at you, Elizabeth Wurtzel]. Oh, there’s just so many things I want to share, to discuss–I want to point to a page and say, “Yes, that’s true,” and then to another, “He’s right.”

. . . [A] fascinating aspect of depression’s pathology . . . This concerns not the familiar threshold of pain but a parallel phenomenon, and that is the probable inability of the psyche to absorb pain beyond predictable limits of time. There is a region in the experience of pain where the certainty of alleviation often permits super human endurance. We learn to live with pain in varying degrees daily, or over longer periods of time, and we are more often than not mercifully free of it. When we endure severe discomfort of a physical nature our conditioning has taught us since childhood to make accommodations to the pain’s demands- to accept it, whether pluckily or whimpering and complaining, according to our personal degree of stoicism, but in any case to accept it. Except in intractable terminal pain, there is almost always some form of relief; we look forward to the alleviation, whether it be through sleep or tylenol or self-hypnosis or a change of posture or, most often, through the body’s capacity for healing itself, and we embrace this eventual respite as the natural reward we receive for having been, temporarily, such good sports and doughty sufferers, such optimistic cheerleaders for life at heart.

In depression this faith in deliverance, in ultimate restoration, is absent. The pain is unrelenting, and what makes the condition intolerable is the foreknowledge that no remedy will come- not in a day, an hour, a month, or a minute. If there is mild relief, one knows that it is only temporary; more pain will follow. It is hopelessness even more than pain that crushes the soul. So the decision-making of daily life involves not, as in normal affairs, shifting from one annoying situation to another less annoying- or from discomfort to relative comfort, or from boredom to activity- but moving from pain to pain. One does not abandon, even briefly, one’s bed of nails, but is attached to it wherever one goes. And this results in a striking experience- one which I have called, borrowing military terminology, the situation of the walking wounded. For in virtually any other serious sickness, a patient who felt similar devistation would by lying flat in bed, possibly sedated and hooked up to the tubes and wires of life-support systems, but at the very least in a posture of repose and in an isolated setting. His invalidism would be necessary, unquestioned and honorably attained. However, the sufferer from depression has no such option and therefore finds himself, like a walking casualty of war, thrust into the most intolerable social and family situations. There he must, despite the anguish devouring his brain, present a face approximating the one that is associated with ordinary events and companionship. He must try to utter small talk, and be responsive to questions, and knowingly nod and frown and, God help him, even smile. But it is a fierce trial attempting to speak a few simple words.

When I reached the author’s bio at the inside back cover, there was this profound regret: He had died in 2006. Haphazard research tells me that he died of pneumonia, at age 81. I felt an intense, troubling loss; midway through the book, I had already planned to pen a letter to Styron–Thank you for writing this, or I hope you are okay; know that you have saved many lives, including mine–but then, no, he was dead. I had missed something I had not even realized was so vital until it was too late.

I did wonder, though: When the depression knocked on his door again, no matter the intensity–When the depression manifested itself after this book was written, I wonder if he felt some burden, a responsibility he had placed upon himself to not succumb, to not die of his own hand. Because here is the book, the proof: It is conquerable, he himself wrote. I wonder if he wanted to take his words back, but knew that he couldn’t, because there it was, this book, a text, something concrete, a truth now.

* Picture of gray book taken on gray bed, beside rather gray and baffling doodles, erm, sketches by Robert Motherwell. I so like a theme, don’t you?

18 thoughts on “marginalia || Darkness Visible: A Memoir of Madness, by William Styron”