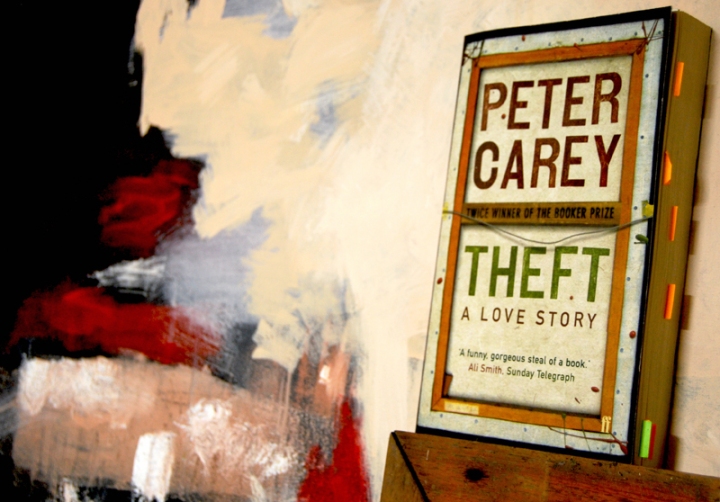 But I am Butcher Bones, a thieving, cunning man and I made this beautiful seven-foot-high monster with my greens and my Dutch canvas and when it was one, and I had cropped it, the result was twenty-one feet long and its bones, its ribs, vertebrae, wretched broken fingers, were made from light mathematics . . . Forget it. This stuff can’t be talked, or walked, or garnered from the auction record. These are my mother’s bones, my father’s dick, the boiled-down carcass of Butcher Bones, bubbling like a cauldron of tripe, and for the ten days and nights I wrenched and slapped and sanded until with the the flood still running through my head, the canvas put the holy fear of God in me , made the bloody hair on my bloody neck stand on end, and if it scared e, who was its maker, assassin, congregant . . .

Theft: A Love Story is my first Peter Carey read. Note that I hadn’t any idea who Peter Carey was–I was only told on Twitter of his “Great Australian Status.” So yes, I picked up this book blindly, drawn by the promise of feverish language and an unrepentant painter + gentle giant of a brother. I like me my unrepentant painters and their furious exultations, not to mention so-called idiot-savant sidekicks.

I liked it. The language was–forgive me–quite luscious. Expert handling of language makes me weak-kneed. The story was fast-paced, the events both hurtling towards you, and you piggy-backing with it. There’s an almost manic quality to the writing, which may require patient reading. Be slow with it. The language is so rich, and the voices are so distinct–just allow yourself to be submerged.

It is hard work to slaughter a beast but when it is done, it is done. If you are MAKING ART the labour never ends, no peace, no Sabbath, just eternal churning and cursing and worrying and fretting and there is nothing else to think of but the idiots who buy it or the insects destroying TWO DIMENSIONAL SPACE.

What is it about? Well. It’s about art. It’s about a down-on-his-luck painter and his lovely brother, and they’re grappling with art scene intrigues and complicated relationships within and outside of the art world. Oh, yes, there’s theft, there are forgeries, there are illicit affairs and more than a handful of betrayals. There are successes. There are failures. There are reflections on the artistic process, its many flaws, its double-edged successes. It’s about sibling love, not-quite-smart love, and love for this undefinable demon called Art.

What are we to do with our emotions? Should they be burnt or nailed up on the wall?

A complaint would probably be, well, the manic-ness could get to you. Not so much a tedious thing–but sometimes, the reader has to say, “Wait,” and pant a little while the narrative jogs in place, impatient. It’s always an odd feeling when the reader feels the narrative could give up on the reader if she won’t keep up.

So, yes, I liked this book. But it could be underwhelming when the story wants to take you everywhere. Patience is key, I suppose. Not bad for my first Peter Carey, really. Though I’m itching to read it again–in a couple of months, I guess–because I feel like I missed something, and I want to drown myself completely in the novel. I knew the novel has the ability to make me completely fall in love with it. It just didn’t happen. I don’t know why, but I’ve got plans to do something about it.

* A note on the picture: Background is a work in progress by The Boyfriend. And no, I don’t have permission to show it here. Oops.

9 thoughts on “marginalia || Theft: A Love Story, by Peter Carey”