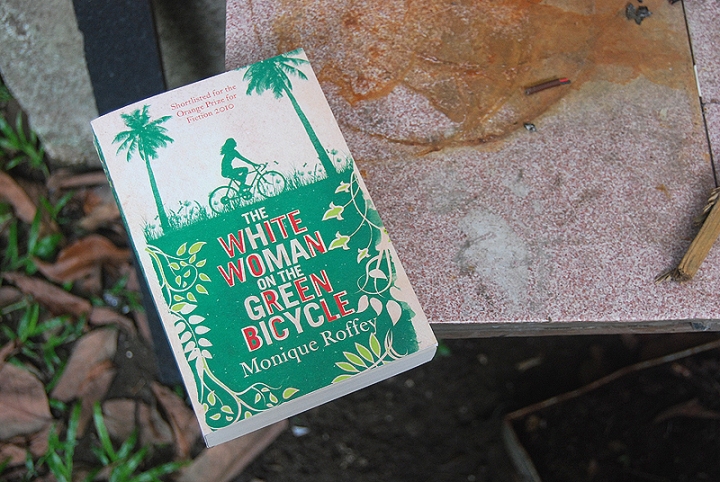 Abandoned for now: The White Woman on the Green Bicycle, by Monique Roffey. This one was shortlisted for the Orange Prize for Fiction this year, and I know a lot of you really love the novel — and I know I could love this novel as much. But. We haven’t been getting along. I picked up this book the third week of July, and I am only at the 140th page of this 430-something-pager. I don’t like those numbers. I especially don’t like the fact that I avert my eyes whenever I happen to glance at the spot it takes on my bookshelves.

It’s been okay, sprinkled with meh. I’m having a problem with the author’s voice, as well as the language of the storytelling. The dialogue needed getting used to — I tend to not like so much books that spell out dialect [except, of course, if it features a man in a kilt, eherm]. I like the characters, love the relationships that Roffey details, and I’m growing complex feelings about Trinidad, where the book’s set [and isn’t that the point?]. But I’ve been trying to fight the feeling that the actual story is taking place elsewhere. Yes, I’m aware of the form in which Roffey crafted this story — and this risk with the form actually makes me giddy. I guess I mean that the novel refuses to stay with me. Or, rather, it refuses to be with me at all. Augh, I don’t know.

I’m at that point in my life — snerk, the drama! Aherm. I don’t have as much free time as I once did, what with the new job and all, and I suppose it’s as good a point as any to learn to set aside some books when the going gets tough. [Yes, I am compulsive book-finisher. I don’t like loose bibliophilic ends.] I can always return to those books later, when I feel like it. And I think I’ll feel like it with Roffey. But right now, no, it’s just not making me happy. I don’t want it to feel like a chore, that I’m just slogging through for the sake of it. Because a part of me still thinks that somewhere in all that Meh is a story, and I do want to get to that.

Just not now. So. Until later, Sabine.

16 thoughts on “marginalia || The White Woman on the Green Bicycle, by Monique Roffey”