A theme is surfacing in my reading, in the books I’ve been drawn to lately, those I tend to like: Books whose main characters [usually women] have, uh, questionable sanity. [Don’t judge me.] I had the pleasure of spending several days with Wish Her Safe at Home, by Stephen Benatar — an offering from NYRB Classics — and it’s a book that fits the description. Main character a woman of dubious sanity? Check. And, yes, I liked it a lot, and for not entirely objective reasons. Oh, the book was good. But a part of me is disturbed by how much I like Rachel. How much I identify with her. Yikes.

As the blurb promises, it’s about a woman, who’s “deliriously happy” not only due to a house she inherits a house from a distant aunt, but also because that’s her nature. The novel details a few choice months in the life of Rachel Waring — happy Rachel, a little too happy sometimes. A neat one-liner about the book would be: A chronicle of Rachel Waring’s ascent [you say descent, I say otherwise] to madness. What impressed me about this novel is how the archetype of the madwoman undergoes a deconstruction through Rachel Waring’s retelling of her own story — and we are witness to this. Is she really mad? Or is this label yet another coercion of society?

As I went through the first several pages of Rachel’s narration, it was easy to see strains of madness, if you were clued into them. But I was inclined to simply call Rachel peculiar. And happy. So she’s a little quirky, fine, but Benatar made it so that it would be too easy — and petty — to simply stamp “Crazy” on her forehead. She simply defies labels.

Yes, predictability, not age, is the antithesis of youth. Predictability and the death of hope. And end to seeking.

In John Carey‘s introduction [one of the best intros I’ve read, actually — though it might be wise to read this after the novel itself], he comments on how empathic a character Rachel is, despite her wonkiness. I was rooting for Rachel. And I was paranoid of the world, for her. Because she wasn’t. You, as reader, analyze the people who interact with her, and man, hackles are raised when we feel that someone is taking advantage of her. We try to do the filtering, because she can’t, not because she’s an idiot or something — she just doesn’t see the world that way. It’s not so much naiveté, as it is a decided happiness. She’s just really happy in the world she’s built for herself.

Sure, it made me sad sometimes. Because I could still step back and see what Rachel’s life was really like. But then, who was I to judge? This was one of the best things I found in reading Benatar’s novel — it made me backtrack, made me question my own judgment.

I admired the fortitude with which I coped. I admired and was surprised by my philosophy. I was becoming quite a girl.

“Rachel, you are becoming quite a girl!”

It was just a pity there was only myself there to say it.

Let’s talk about unreliability. We’re in Rachel’s head for the entirety of the story. And early on in the novel, I tended to look at people with suspicion. Sylvia, for example, the decades-long roommate of Rachel before she moved to her aunt’s house. In contrast to Rachel, Sylvia’s extremely abrasive. Crass, in contrast to Rachel’s occasional quaintness, her genteelness, no matter how put-on. The thing is, we see Sylvia turn into the voice of reason. She and I had the same views, mostly because she could pose an alternative perspective on things. A view that the reader is eventually inclined to see as more realistic. See, Rachel thinks of herself as a good singer — she loves her show tunes — and .

It’s an “archaeology of fictions” — a phrase borrowed from Siri Hustvedt’s What I Loved. To put it bluntly, Rachel Waring lies to herself. A lot. At first, I saw her recounting of certain events rather quaint. Like a throwback to more sophisticated, dainty, lady-belle times. And then we notice that some things are just off — we see clearly through the haze she’s inadvertently put up. There is no deterioration of her sanity, per se; it’s just that us readers are able to see things more clearly. Despite her recounting. 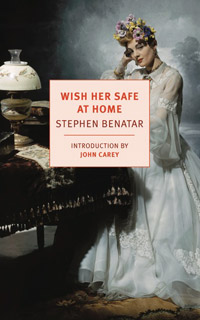 Okay, okay, so Rachel has habits that may seem to people as just, well, weird. She talks to herself. She has elaborate fantasies — eventually her entire life becomes one. She talks to a lot of stranger, and rather inappropriately. At one point, she interacts with a portrait of a man. There is nothing wrong with this, for seriously, people.

Where was the harm in a small amount of absurdity?

How intense Rachel’s fantasies are! There is no Whys to this, I’ve found. Simply, just, there. She’s happy. Her happiness exceeds human limitations. But so what? Everyone has an alternate life, really. I have my daydreams, and I’m sure you do too. The difference is, Rachel is happy — that’s the most important thing. She doesn’t dwell on how preferable this alternate life is to her own, her “real one.” Because she doesn’t think of her reality as fantasy. It just is.

Also: The image used for the cover is just so gorgeous. It’s called In the Daguerreotype Manner, and it’s by John Rawlings. Respect.

Also: I like my little joys in life — Benatar’s book kept me company during my first official week at my new job. I read it on the train, during lunch time, when the boss wasn’t looking. So, well, yay.

Of course: Many many thanks to Jenie of NYRB Classics.

16 thoughts on “marginalia || Wish Her Safe at Home, by Stephen Benatar”