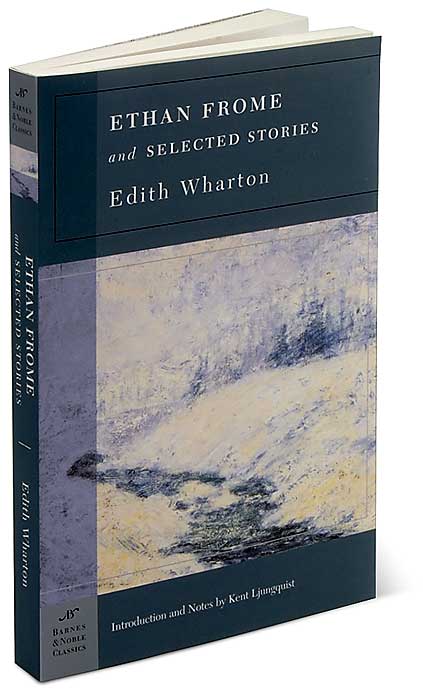 I had abandoned Mikhail Bulgakov’s rather unfriendly goliath, The Master and Margarita, and looked to my shelves to keep me company. It was Ethan Frome, by Edith Wharton, that I picked up idly. I had intended to just dip in, to sample. But then I sank into my bed, and read it to the end, after which I flipped the book to read the first chapter all over again.

People have said that this was good, but my goodness, augh. So so so very good, so very beautiful. I went away gobsmacked. Ethan Frome made my heart hurt in so many different ways, and it was wonderful.

Yes, I am gushing. And I will continue to gush. I will embarrass myself, no doubt about that, and this’ll be a long one. Y’all are free to leave me in my dorkus delirium — Here, some notes:

♦ Unnamed narrator in Starkfield, sees old Ethan Frome, a “ruin of a man.” The questions: What could have prevented a man from leaving a place like Starksfield? Or, perhaps more importantly, What could have made him stay?

He seemed a part of the mute melancholy landscape, an incarnation of its frozen woe, with all that was warm and sentient in him fast bound below the surface.

♦ The story — Our narrator tells us it’s culled from different sources, but, curiously enough, not from Ethan and all involved ones — Extended flashback. Ah, the conceit — it’s a short fiction technique. Then again, this clocks in at just over a hundred pages.

She had an eye to see and an ear to hear: he could show her things and tell her things, and taste the bliss of feeling that all he imparted left long reverberations and echoes he could wake at will.

♦ Mattie Silver, as a reminder of hope. I am swooning:

…through his tingling veins and tired brain only one sensation throbbed: the warmth of Mattie’s shoulder against his. Why had he not kissed her when he held her there? A few hours earlier he would not have asked himself the question. Even a few minutes earlier, when they stood alone outside the house, he would not have dared to think of kissing her. But since she had seen her lips in the lamplight he felt that they were his.

♦ Ah, the contrast. Zeena Frome, easily labeled as a horrid harridan. How judgmental of me. Good job, Wharton. And Mattie, the enchanting young and destitute cousin.

♦ Zeena leaves to consult with a doctor, and you’d expect some hanky-panky. But this is all about the tension, and at the same time, that heart-wrenching quiet intimacy you feel with a person you’re not supposed to feel that about.

And he pictured what it would be like that evening, when he and Mattie were there after supper. For the first time they would be alone together indoors, and they would sit there, one on each side of the stove, like a married couple, he in his stockinged feet and smoking his pipe, she laughing and talking in that funny way she had, which was always new to him as if he had never heard her before.

♦ Exclamation point! He doesn’t have that image with his wife. — Why Zeena? He took care of him, his parents. And she proved efficient, capable. But:

After the funeral, when he saw her preparing to go away, he was seized with an unspeakable dread of being left alone on the farm; and before he knew what he was doing, he had asked her to stay there with him. He had often thought since that it would not have happened if his mother had died in spring instead of winter.

♦ Note the significance of the winter image thingy. Real time, and this extended flashback. This thing with Zeena. And very early on in the novel, Harmon commenting, “Guess he’s been in Starkfield too many winters.” Whoa. I am dorkeh.

♦ On Zeena. Ethan on their marriage, a paltry paragraph. Ooh, bias! Awesome. Asking myself that perhaps this isn’t entirely Zeena’s fault, her sickness, her disposition. Up to now, I hadn’t looked at Zeena as the poor, martyred wife. Ethan’s feelings for Mattie overshadowed that. But now, but now. This is so freaking cool — Later, perhaps Zeena is taking things into her own hands — deliberately? Man, I am beginning to like her. I have long begun to overthink this too.

All the long misery of his baffled past, of his youth of failure, hardship and vain effort, rose up in his soul in bitterness and seemed to take shape before him in the woman who at every turn had barred his way. She had taken everything else from him; and now she meant to take the one thing that made up for all the others.

♦ Augh. You’d think this was predictable, that you can see what’s going to happen. And yeah, they do, but not the way I’d assumed. That is, see, the revelations and events just felt inevitable — and isn’t that what finely crafted fiction is?

♦ That ending! I need to talk to someone about it, haha.

31 thoughts on ““He seemed a part of the mute melancholy landscape, an incarnation of its frozen woe…” – Ethan Frome, by Edith Wharton”