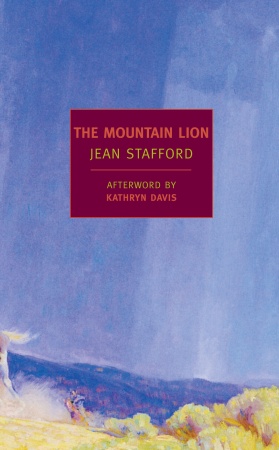 Jean Stafford‘s introduction to her 1947 novel, The Mountain Lion, closes with: “Poor old Molly! I loved her dearly and [spoiler spoiler spoiler].” That never augurs well. You begin the novel wary of tragedy, anticipating brokenness and all-around disaster. That you feel, even within the first few pages, that it shall all lead to you bawling in a shady corner. I know I let out one of those hoarse/squeaky screams in a crowded train when I reached the book’s end. But we’re getting ahead of ourselves, aren’t we, Miss Stafford?

The novel opens with brother and sister, Ralph and Molly Fawcett, let out from school early, nursing dual-nosebleeds. They share the aftereffects of scarlet fever, which they both suffered through–Ralph and Molly look identical, act the same, are both sensitive and bookish and keep to themselves, are intolerant of the same fussy adults, bound together against the rest of the world. There’s something touchingly symbolic about this bond through nosebleed, but more so, I couldn’t help–even at this first handful of sentences–but feel nervous. Blood makes me queasy. The image of two children walking home with chronic nosebleeds–often striking them simultaneously–I find cute [but I am strange]. But yes, it made me nervous.

It’s a coming-of-age story, one distinct of its treatment of two childhoods. It’s more than seeing Ralph and Molly grow up and, as we expect, grow their own ways: What Stafford chooses to focus on is how they splinter. We’re witness to how a seemingly indestructible bond falters due to your usual reasons: Ralph and Molly need to strike their own paths. Whereas once they were united against the world, against its tragedies, against the more frivolous members of their families–this unity falls apart. A steadfast love turns into adolescent annoyance, hinting at a possibly intense hatred.

He looked at his weedy sister with dislike as she crouched on her heels, plucking the lilies all around her, and when she looked up at him, her large humble eyes fondling his face with lonely love, he wanted to cry out with despair because hers was really the only love he had and he found it nothing but a burden and a tribulation.

A death in the family spurs this splintering, and it’s not noticeable early on: They simply have different ways of dealing with their grief. Ralph’s introspection leads him to desire more of the outside world. Molly’s thoughts acquire this morose and bitter edge.

“Do you know, Molly, I sometimes think you and Ralph are happier with your uncle than you are at home.”
“I do not believe in happiness,” said Molly.

The differences are compounded by their visits to their Uncle Claude’s ranch in Colorado. The landscape gives Ralph the opportunity to be a man–he has grown up with three sisters, and a fussy mother, a father gone too soon. Molly grows more awkward, too serious for her age. Too aware and stubborn of her differences to be called precocious. It’s heady, it’s symbolic. And there’s a trace of unease seeing these two fall apart. A sadness. And, yes, that nervousness again.

For four years now Ralph and Molly had divided their year between the men and he merchants. Their lives were like those of children of divorced parents who spend a season of each year with their father and the bulk of it with their mother and who feel themselves thus split in half and sometimes find their memories confused, so that they cannot be sure what books have been read, which ideas acquired, which sounds and shapes perceived in the two separate households. Their own relationship was likewise a double one. At the ranch, they all but ignored one another, but in Covina, alone with their mother now that Leah and Rachel were away at boarding school, they were still close friends.

It’s a compelling story–this from a girl who doesn’t have a lot of coming-of-age novels in her bookshelves. Emotions run high–the intensity of childhood, of adolescence!–and Stafford takes advantage of this: She can be ruthless: Stafford can be ruthless: Molly was not only ugly, she had a homemade look, a look of having been put together by an inexperienced hand. As ruthless as Molly, who keeps a list of Unforgivables [a list that alarmingly grows in number].

Stafford can be surprisingly tender too: The discovery of adulthood, almost as if you’ve only stumbled upon it–He whirled round and round in his rapid love; it pricked him on the breastbone like a needle. He wanted to be shut up in a small space to think about it. He wanted to grab it and eat it like an apple so that nobody else could have it.

I think what makes it compelling is how calm it can be, despite that faithfulness to those high emotions. [Remember when a text reply that took two minutes too long in coming would make you want to wail, Sasha?] It’s eerie, how controlled Stafford is, how she delineates between her characters so well–Everything is necessary, not a word out of place. It’s all so organic, all the symbols moving toward that must-happen ending. Spoiler or no spoiler from the author herself, there’s something intrinsically base about that penultimate scene that it’s perfect for the novel. And no, I didn’t see that coming. But that wariness was always there, Something bad’s going to happen. It did. One moment you’re watching Ralph and Molly splinter, the next, whoomp.

The verdict? I screamed in a crowded train, on my commute home. That’s, like, ya know, major. And annoying. But yeah. There.

14 thoughts on “marginalia || The Mountain Lion, by Jean Stafford”