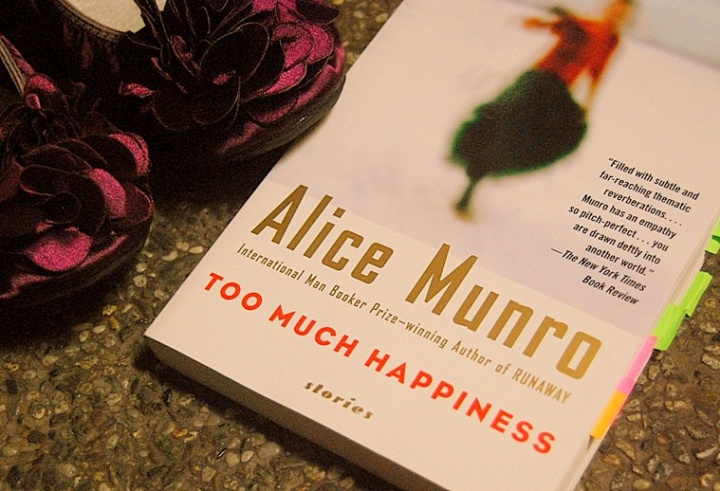 I’ve known this for a long time, and it always give me a thrill having it reaffirmed time and time again: Alice Munro is one of the best short story writers ever. Her latest collection, Too Much Happiness, was stunning—with complex characters and grand narratives and fluid prose, the stories pretty much pitch-perfect.

I read the first story, “Dimensions,” and then sat back, overwhelmed by how good it was. It’s about Doree, see. Doree is a chambermaid at a hotel, preferring to lie low. Munro throws hints about the Big Picture, even as Doree goes through the motions. We learn she’s taken on a new identity, that she was in the papers. That she’s seeing a psychiatrist, that she’s been sneaking off to visit her husband.

She had felt that she was put one earth for no other reason than to be with him and to try to understand him.

Well, it wasn’t like that now. It was not the same.

The crafting, oh lordy—the revelations, how to reveal them and how much. And the storytelling’s just right, the elegance of Munro’s handling of chronology. The gradual forming of such a solid main character in Doree—her past and its token mysteries, her present, and the possibility of a future. The details, the incisive and in-depth characterization. I mean, come on, this is a lesson on craft: the story’s in the third person limited, but most of what occupies Doree’s mind are speculations as to what other people may think of her, how she appears to other people. Nakakapanggigil yung ganito kagaling na manunulat. Leche.

[I want to talk obsessively and long-windedly about each and every one of the stories in this collection. A feeling, I am sure, most Munro readers have upon a story’s end. But, ah, the Intarwebz’ constraints.]

The second story, “Fiction,” which I figured I’d like even before I read the story, because, well, that title! Anyhoo. Again, an awesome story. Basically: what if you were the subject of someone’s fiction? And that fiction concentrates on an event that occurred too long ago that you don’t even remember that it happened—that you can’t even be sure whether it’s real or not?

That feeling of relinquishing your identity to a person you’ve met [an inconsequential meeting to you, for she nonetheless remains a stranger]. This stranger who doesn’t even remember you as a person—she owns you now, with this vision of you. You’re a character. You look at the page and relent, Maybe this happened, and then you come to a scene and this distress fills you, and later, fury: “Here was where the writer would graft her ugly invention onto the people and the situation she had got out of real life, being too lazy to invent but not to malign.” Goodness, isn’t fiction powerful?

And doesn’t it show its true strength when, even as the story “maligns,” it reaches in you and grabs hold of you, and reminds you—Hey, this story still is about you, I couldn’t get this part wrong, Joyce, no:

Love. She was glad of it. It almost seemed as if there must be some random and of course unfair thrift in the emotional housekeeping of the world, if the great happiness—however temporary, however flimsy—of one person could come out of the great unhappiness of the other.

Reading Munro makes me incredibly glad and proud to read short fiction [and, yes, humbled that I write some when the alignment of the planets allow.] The beleaguered “muse” Joyce describes her writer Christie’s book as “a collection of short stories, not a novel. This in itself is a disappointment. It seems to diminish the book’s authority, making the author seem like somebody who is just hanging on to the gates of literature, rather than safely settled inside.”

And I had a vision of Munro gleefully writing that passage down. [She better know that she’s got prime real estate within the gates of literature, demmet. Man. I wonder how it feels to be Alice Munro.]

The story “Free Radicals” starts off simply enough: your husband dies before you, quite suddenly, when you have had years to prepare for your own death from cancer. Yes, it’s charming and poignant:

She thought carefully, every morning when she first took her seat, of the places Rich was not. He was not in the smaller bathroom where his shaving things still were, and the prescription pills for various troublesome but not serious ailments that he refused to throw out. Nor was he in the bedroom which she had just tidied and left. Not in the larger bathroom which he had only entered to take tub baths. Or in the kitchen that had become mostly his domain in the last year. He was of course not on the half-scraped deck, ready to peer jokingly in the window—through which she might, in earlier days, have pretended to be starting a striptease.

But Munro takes off from this serenely dignified [and easy-to-exploit] premise. She—because she can, and she can make it work—seamlessly turns to a home invasion for the hostage-taker and our widow exchange stories. Like Scheherazade, only this one couldn’t care less if she died or not.

How does Munro know how to craft these stories? What to reveal, and when, and how? How to structure, and how to layer? How to make it all seem so painless? How to create such intricate narratives yet leave the reader with more questions—and yet never make her feel bereft?

How to shake a reader so badly that she runs to her notebook and prays to Ye Gods to give her the dredges—the contact high—of having held such glorious fiction in her hands?

Universe, how does it feel to be Alice Munro?

2 thoughts on “Alice Munro, Too Much Happiness, “the emotional housekeeping of the world,” and simple goodness”