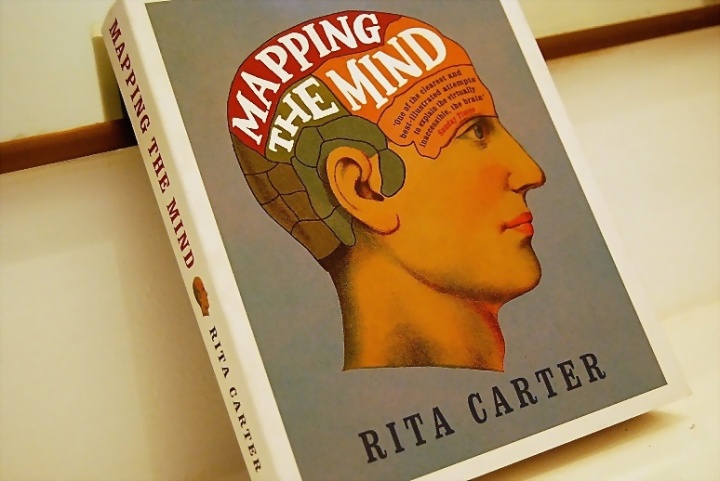 Because I am a curious goat, one easily awed by pictures of squiggly lines meant to represent my brain, I read the new, comprehensively updated edition of Rita Carter’s Mapping the Mind. Turns out, it’s a rich depository of facts, aiming to shed some light on the shadow-y areas of our humanity—the mind.

Carter offers a lot of the pertinent research, case studies, and some lesser-known truths about what’s going on up there, and it’s all in prose easily understood by your average gal. And what the brain reveals—and, as Carter herself points out, it has been slow to share its secrets—is tremendously fascinating.

It’s difficult to share how dorkily satisfying it was to spend a couple of days with this gorgeous book. The basic and usually definite differences between the right and the left hemisphere, for instance: in a study with a split-brain patient (basically, there’s a vital gap between the two sides of the brain), questions were directed to each hemisphere, and the responses were quite different. It’s too complicated a process for me to quote here, but, dude, in one case, the questions was, “What do you want to do when you graduate?” And the left (dominant) hemisphere answered, “I want to be a draftsman. I’m already training for it.” But the right hemisphere answered—spelled out the words with Scrabble tiles—“A-U-T-O-M-O-B-I-L-E R-A-C-E-R.”

These two words constitute about the longest and most verbal complex message ever to emanate from a non-dominant hemisphere. The fact that it was so clearly in conflict with the boy’s declared ambition suggests that it was not just conveying a concept that had been constructed by the dominant hemisphere and somehow “leaked” to it. It was its very own idea—one that had hitherto been hidden from its twin and from the outside world to whom, until that sophisticated laboratory set-up was in place, the right hemisphere had been unable to speak.

The possible implications of this are mind-boggling. It suggests that we might all be carrying around in our skulls a mute prisoner with a personality, ambition and self-awareness quite distinct from the day-today entity we believe ourselves to be. Our consciousness may be a single stream because it is the consciousness of our dominant stream only. And if this is o, where is the other entity actually doing its experiencing?

Oh, there’s more, there’s so much more. The science of fear, anger, sex, love, creativity, sadness. So revealing, so awesome. Every day with this book on my bedside table [we finally have a bedside table!] had me feeling like Dexter [of Cartoon Network’s Dexter’s Laboratory], who would shoot out of bed, chanting, “Ooh, what a wonderful day for science. Ooh, what a wonderful day for science!”

I am embarrassing myself, aren’t I?

I bought Mapping the Mind (Php495) a few weeks ago, in NBS-Katipunan, because my friend Tin was browsing it and I immediately nabbed it from her. I am that kind of friend.

2 thoughts on “On Mapping the Mind by Rita Carter”