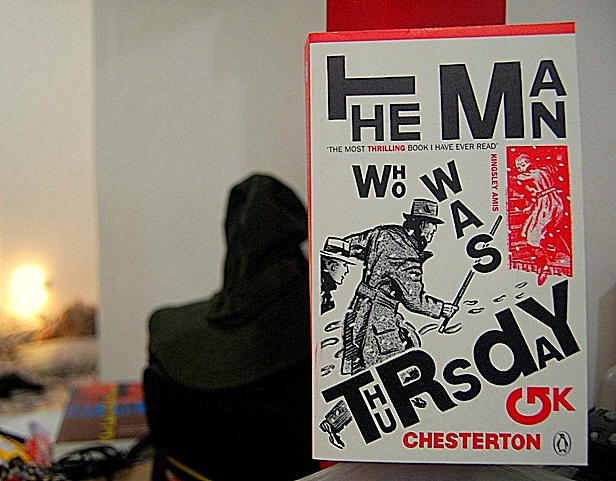 I very much enjoyed this, surprisingly. Which is to say, this isn’t the kind of book I usually read. Which just goes to show how reading itself encourages Bibliophilic Identity Crisis. This was all sorts of fun: a mystery, a deeply philosophical novel. And, as Chesterton emphasizes, “a nightmare.” Here, in an essay he wrote [included in this edition] years after he wrote Thursday:

The book was called The Man Who Was Thursday: A Nightmare. It was not intended to describe the real world as it was, or as I thought it was, even when my thoughts were considerably less settled than they are now. It was intended to describe the world of wild doubt and despair which the pessimists were generally describing at that date; with just a gleam of hope in some double meaning of the doubt, which even the pessimists felt in some fitful fashion.

Got that, Sash? So. “Philosophical policeman” Gabriel Syme infiltrates the inner circle of Europe’s Central Anarchist Council and manages to get himself—by a rousing, provoking speech [which involves a clever play on honor and trickster-y between Syme and an established anarchist]—elected to the position of Thursday. Da-dum. It’s his mission, after all, to put an end to this “disease” plaguing ze world around him.

Again: very fun, rather thrilling. Chesterton’s frequent surveys of characters, the detail that goes into Syme’s observations—and all the philosophizing, the navel-gazing, the grand prose of elaborate speeches and anarchist merry-go-round discourse. See this review of the Council’s members, during Syme’s first sit-in in his official capacity as Thursday:

Each man had something about him, perceived perhaps at the tenth or twentieth glance, which was not normal, and which hardly seemed human. The only metaphor he could think of was this, that they all looked as men of fashion and presence would look. With the additional twist given in the false and curved mirror.

Verra creepy, yes, and Chesterton then allows Syme to closely scrutinize each member of the Council. All very astute observations, especially in light of what will be revealed later on—but, for now, there’s something inherently disquieting about the people around Syme/Thursday, and it’s this tension that had me [and Syme] jumping when Sunday, the leader of the Council, reveals one of the Council as an undercover philosophical policeman. Da-dum, yet again.

Ah, Sunday. Who is Sunday? Here, a conversation:

It sounds so melodramatic and far-fetched when I quote that passage here, but, seriously, there’s something chilling about how maniacal/calm, imposing/seductive Sunday is. Who is Sunday, and what is he up to? What did he mean to happen? And, again, in light of the revelations: Why, Sunday, why?

It’s been days since I read this, but, man, I still don’t fully understand, haha. Like Syme, I was “walking in a world he half understood.” A phrase that aptly describes the adventures and foibles of The Man Who Was Thursday:

Exactly, Syme, exactly. I came into The Man Who Was Thursday believing it was some hard-boiled detective novel. I was ready for old-fashioned noir-ish predictability. Nope. And when a guess did prove right, Chesterton managed to turn that truth around into something even more baffling, as far from what anyone can assume as possible. It was sinister, but it was fun—a rollicking chase around Europe, with farmers and bankers and trains and sheep and horses and ancient lamps.

Dude, I am not making sense, but this was action-packed and intelligent and so thrilling. Never mind that I still occasionally pick it up again to riffle through the last pages, looking for a clear, do-not-capsize-on-me-yet-again answer. [Then again, I don’t mind much that I don’t have all the answers. Or the best possible guesses.]

Reading Begets Reading: I bought this book because Anne Perry, whom I haven’t really read, pointed me to it in her essay in The Book that Changed My Life. After Chesterton, I jumped to Justin Taylor’s first novel, The Gospel of Anarchy. Because that’s how I roll. Literal-wise-ly.

4 thoughts on “The “capsized universe” of G.K. Chesterton’s nightmare:”