#38 of 2011 • The Sorrows of Young Werther, by Johann Wolfgang von Goethe; translated from the German by Michael Hulse

♦ How Young Werther loves, ex.01 → Ah, how the thrill of it shoots through me if my finger happens to touch hers or our feet meet beneath the table! I recoil as if from fire, yet some secret force draws me on again—all my senses grow dizzy.—And oh! Her innocence and her ingenuous spirit do not feel what agonies these little intimacies push me through. Indeed, if she places her hand on mine when we are talking and, excited by the conversation, moves closer, so that her divine breath brushes my lips—I feel as if I shall sink into the ground, as if I had been struck by lightning.

♦ Three years ago, after expressing my frustrated curiosity of the novel Roland Barthes kept referencing in A Lover’s Discourse: Fragments, the friend I was having coffee with (Marie) said she’d lend me Goethe. When she handed it to me days later, she said, “You know, Werther is really pathetic.” [Thoughtful pause.] “I think you’ll really like him, Sasha.” Such are my friends.

♦ Reading Young Werther in another café, sitting at my usual table with another friend. Tin would raise her head from Stardust and knit her eyebrows at me chuckling—no, laughing, as in, in ridicule—at my own book. I’d told her about Werther’s extreme loving, his desperate ardor—his kiss-the-guns-I’ll-use-for-my-death kind of passion. This was supposed to be a book exultant about that demon, Unrequited Love. This was supposed to about desolation, about despair. But every couple of pages or so, I’d be laughing my ass off, then apologizing to Werther, then laughing my ass of because Good god, man, get a hold of yourself.

♦ How Young Werther loves, ex.03 → Did it really have to be like this?—that the source of Man’s contentment becomes the source of his misery?

♦ Isn’t it a wonder that one of my favorite parts of the novel was when quite-tepid Charlotte gives Werther a lecture, tells him to stop loving him? Was when quite-tepid Charlotte, in that long monologue of hers, the one Werther refused to pay attention to, when she told him—Be a man. I fell off my seat laughing. Quite disrespectful of me, yes. This cannot go on, Lotte tells our doomed hero.

‘Oh, why did you have to be born with this intense spirit, this uncontrollable passion for everything you are close to! I implore you,’ she went on, taking his hand, ‘be calmer. Think of the many joys your spirit, your knowledge and your gifts afford you! Be a man. Put an end to this dismal attachment to a creature who can do nothing but pity you.

♦ How Young Werther loves, ex.04 → It is as if a curtain had been drawn from before my soul, and this scene of infinite life had been transformed before my eyes into the abyss of the grave, forever open wide. Can you say that anything is, when in fact it is all transient? and all passes by as fast as any storm, seldom enduring in the full force of existence, but ah! torn away by the torrent, submerged beneath the waves and dashed against the rocks? There is not one moment that does not wear you away, and those who are close to you, nor any one moment when you yourself are not a destroyer, of necessity: the most innocent of walks costs thousands of wretched grubs their lives, one step wrecks what the ant laboriously built and treads a little world into an ignominious grave underfoot. Ha! It is not the major but rare catastrophes of the world, the floods that wash away your villages, the earthquakes that sallow up your cities, that move me; what wastest my heart away is the corrosive power that lies concealed in the natural universe—in Nature, which has brought forth nothing that does not destroy both its neighbour and itself. And so I go my fearful way betwixt heaven and earth and all their active forces; and all I can see is a monster, forever devouring, regurgitating, chewing and gorging. Oh, Werther. Damn, that wretched boy is eloquent.

♦ Yes, Marie. Werther is quite pathetic. And, good lord, but I like him. I want to give him a good slap and tell ‘im to get over himself already, to be a man—but this is Young Werther; his fever spawned a generation of then-emo-hipsters. [There I go again with the irreverence.] I am patronizingly amused, but quite affected. Holy cheesecake, Werther, just chill, will ya?

♦ Wretched being! What a fool you are!—goes the verbal whipping from Young Werther, with love and much admiration, to Young Werther: Are you not deceiving yourself? What is the point of this wild and ceaseless passion? 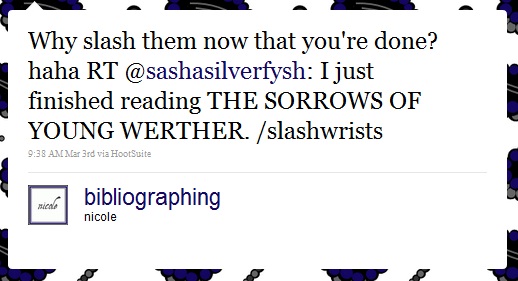 7 thoughts on ““Oh, what a creature is Man, that he may bewail himself!””