My reunion with the romance novel has gotten the gears turning, and I’ve spent the past weeks since then devouring, acquiring, swooning over, and muttering about the genre—and here are three:

Just recently, over at Tumblr, a “quiz” popped up on my dashboard—given the Royal Wedding hoopla, the writers and editors over at Newsweek and The Daily Beast have been getting their romance novel prose out [and squick-ingly so, the implication goes (I am paranoid)], and could the reader see which lines were from the RW reports and which ones from romance novels?

I discovered that it was far easier to point to the lines from the romance novels—Balogh, Martin, and Garwood were among the pick. I’ve also discovered that Tina Brown from Newsweek, with a little editing and self-awareness, could just write her own stacks of romance novel—follow your heart, I implored her. See: “Her gaze was level and demure, secure in the long years of his affection. He returned it with a look that said, I trust.” Which could be baffling in a coverage about a real-life wedding, but would no doubt fit perfectly into a post – Big Misunderstanding scene from, say, Judith McNaught, right after the Good Grovel.

Two things: #01, Funny how this follows backlash on Mark Hachman, who tried to parody the romance novel prose. But Tina Brown’s lines? Too cringe-y to be ridicule. They’re too knowledgeable to be asshattery. This is not mocking, nope. My bet’s on earnest attempt.

And #02, it all makes one wonder about what exactly “romance novel prose” is, how strongly it relies on context—because, yes, as careful and politic as we try to be, there can be distinct [or otherwise] tones and diction in every genres.

We’ll see where this leads. I am too flighty to focus at the moment.

General Muttering #02: Boredom, with a side of tortillas? 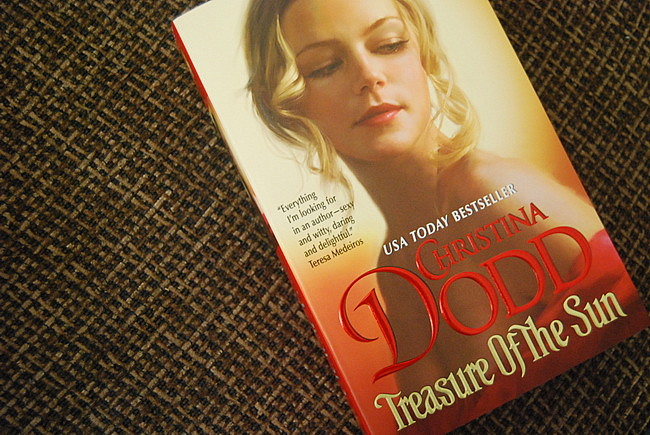 A muttering of the Ranty McRant sort. Who has read Treasure of the Sun by Christina Dodd? [I thought it was a recent release, but apparently, it’s a republication.] Were you as bored as I am? Did you not care at all about the romance, the characters supposedly involved in it—because you couldn’t find ‘em?

Did you notice the dawning horror on your face as you realized that this book was going to go on and on and on and on about: #01, Katherine’s mysterious widowhood; #02, the mysterious threat of a mysterious killer; #03, a mysterious treasure hunt; #04, the annexation of California [really?!]—oh, yeah, and #05, the inherent [cultural] differences between the blonde Bostonian Cinderella and the be-moustached haciendero who’s got the hots for her for the longest time?

Did you have to resort to holding a highlighter aloft, ready to swoop down when the H/h and their romance deigned to appear? And, it bears repeating, were you bored out of your wits?

Or, has my impatience / weirdness / unwillingness to have the narrative look away from the H/h reared its ugly head once more?

The first weekend of May, I snuggled with three anthologies of romance novellas that promised lots of lurve despite the lack of conventional length. Now, I won’t read a romance novella if I can help it. Once in a while, I can convince myself of the economic merits of buying three/four stories for the price of one book, but even I know that’s stupid reasoning—So it’s almost always ultimately a bad idea for me.

I want my romances well-established. For me to believe the Happily Ever After, I have to know they’ve been through shit and back. For me to believe in the actual romance, I need to be invested in it, and in my case, emotional investment requires the length of the text required for solidness and complexity. I’ve read so so so very few novellas that succeed—generally, they just don’t have the space for that kind of thing. Chemistry feels wooden—hell, rapport is dubious—what more actual affection and—egads—love?

And, I’ve noticed, authors have found ways to compensate to accommodate the form. Here’s a quick survey of the ten [in total] novellas from the three books pictured above:

• Four of the novellas have the main characters sharing a history, and most of them are concerned with rekindling a romance [cut off due to immaturity, asshattery, different needs at zat point in time, etc.]

• The rest of the novellas: five deal with forced situations. For example, Jaid Black’s two novellas get things rolling by having the heroine get kidnapped by a neo-Viking tribe that lives inside a mountain. Yes. For the more mundane kind: Vacation mishaps [shared rooms, witness protection program on a fantasy island, normal shit like that].

• The one novella that had the H/h meeting for the first time was deathly boring. Something about a hockey player and a student of fashion design. Fuck it, I don’t know.

Just some observations up there. Oh, and the one novella I’d praise to the high heavens is Kresley Cole’s The Warlord Wants Forever, which involves an immortal vampire warlord and the craziest heroine ever in the form of a Valkyrie. [Note that it’s markedly longer than the standard 100-page length of all the others.]

I’ve been a busy little bee. Off to read more romance novels. Also, to attack my pending post on Eloisa James’ When Beauty Tamed the Beast, which is one of the best romance novels I’ve read in a very long time. So, you see, no pressure at all. Happy days, you all.

3 thoughts on “General mutterings on prose, boredom, and credible love, or: Reuniting with my romance novels, v.02”