In this post: Thoughts on Eats, Shoots & Leaves by Lynne Truss [jump to A], and on Mrs. Beeton’s Household Book edited by Kay Fairfax [jump to B]—eventual reading in my quest to sustain Dorkus Randomicus status. Because, ya know: There comes a time in a young woman’s life when she’ll hunger for a book about how to employ a “zero tolerance approach to punctuation,” and, exhibiting the same thirst, follow that up a few days later with “an entertaining glimpse of upstairs and downstairs life in the Victorian home.” Yes. There better be those kinds of times—validate my normalcy, please?

[A] • My job—ya know, the thing I do to pay for this bibliophilic madness—insists on near-maniacal fastidiousness about grammar, and I say that in the fondest voice possible. Sure, this is an ideal that goes out the window when I figuratively clock out, as evidenced by this blog, hahaha.

So it wasn’t that idly that I picked up Eats, Shoots & Leaves by Lynne Truss—which, by the way, just annoys me with its your-prerogative attitude on the Oxford comma, and its apparent fondness for the ampersand. [I am in pain trying to stop myself from writing the title as: Eats, Shoots, and Leaves. Hell, this book has even shrugged about my insistence of italicizing titles. Come on, Miss Truss, please?]

Two main challenges to my digestion, even my comprehension: Information overload, and the fact that our house style doesn’t conform with the rules of British grammar. Great. So, no, this wasn’t zipped through. This was read with the intention to learn, even scolded. This was read with a pen aloft and a notebook ever-handy. This was read with me wielding whatever it was I picked up the next day, to the bewilderment of my co-workers at the face of my random thoughts about commas and semi-colons and em dashes.

[B] • And then, well, Mrs. Beeton’s Household Book, adapted and edited by Kay Fairfax, was read because I felt like it. Because while I was hanging out at the bookstore waiting for the X-Men: First Class screening, I saw this beckoning me, and I had to buy it. And, well, because I am curious about the Victorian era, and very very very fascinated with romance novels set then. 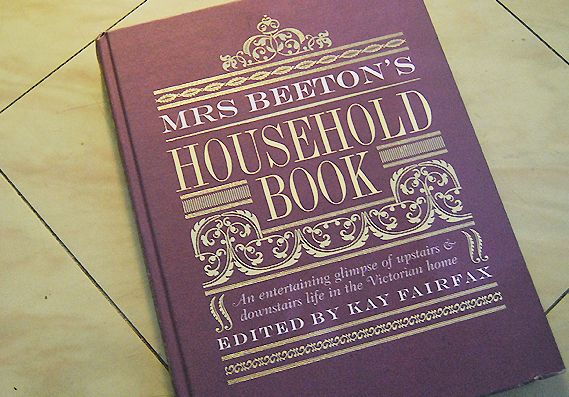 Holy baby pandas, I loved this antiquated, awfully practical, and occasionally self-righteous book—mostly from Mrs. Beeton’s Book of Household Management by Isabella Beeton, first published in 1861 [and, partly, Fairfax’s frequently in attendance, yet often superficial commentary]. I mean, come on, a book that intones, “She who makes her husband and her children happy, who reclaim the one from vice and trains up the other to virtue, is a much greater character than ladies described in novels.” [Beeton, there!]—isn’t that just a freakin’ hoot?

Hee, it’s all so fascinating, and I learned a lot of useless information. Sure, I’ve learned more in amassing countless of historical romance novels, but it’s great to know the particulars—that twin footmen were considered a status symbol, not unlike bookends; that the Victorians liked a lot of junk in their houses; that the drapes were almost always drawn shut, because they believed that sunlight was bad for both furniture and people; that there were no bedside tables then; and that I’d also been advised to never enter a sickroom with an empty stomach, as the body is more susceptible to contagion when hungry.

Armed thus, I am so freaking ready for the world.

PSA: Both books—Truss, PhP465, and Beeton/Fairfax, PhP250—were recently bought at National Bookstore Katipunan. Both times, I wasn’t even supposed to be hanging out at NBS Katipunan.

2 thoughts on “Knowledge for knowledge’s sake?”