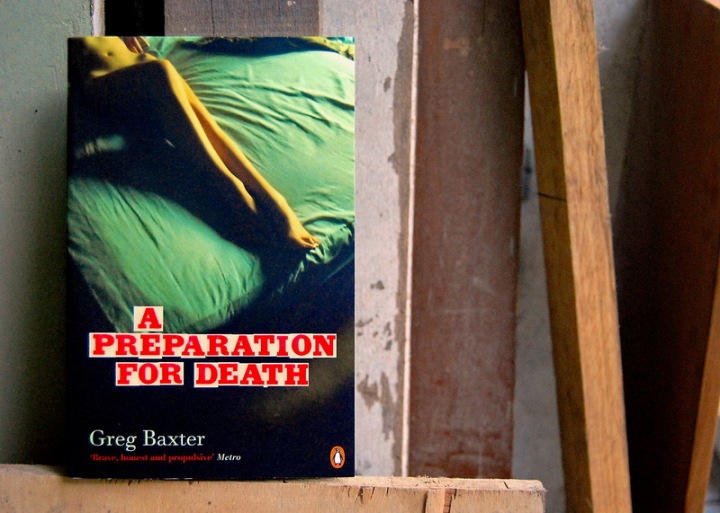 Traditional autobiography is composed after the experience has passed. It reaches into memory and the past, but it is a constant rush into the darkness of the undiscovered. There was never an end in sight, until I landed in it. I was living a hectic life, and I presumed I would simply have a heart attack and die before the question of an end arose. That is not exaggeration—in fact, the urgency with which I pursued honesty is, in every sentence of this book, a preparation for death. Nevertheless, the story had momentum, because the annihilation of ambition and entitlement is a process that deepens. You think you’ve told an eviscerating truth about yourself, but all you’ve done is discover the lie it was founded on, so you tell a new truth, and so on, until there are no guts left to rip out. And that is the end.

I’ve found that memoirs are difficult to talk about in polite company: Beyond theory, how do I treat as separate entities the life and the text used to evoke that life? Yes, the “right” thing to do would be to separate the two—or to judge only the text, if it gives justice to the life—an unnatural move, in my opinion, when both are so intertwined and so essential to each other. Can I say one has had a unremarkable life, but the writing makes me breathless? Or can I say that the writing is nothing spectacular, but the life led has sent shivers through me? Or can I say that, in the space of a two hundred or so pages, I managed to see-saw between both opinions?

In his A Preparation for Death, sometime-writer Greg Baxter recorded a few years’ worth of dangerous excesses and personal decay, the climax of nearly a life’s worth of disillusionment. There is a lot of bad juju going on in here, and we witness Baxter’s crumbling: how he’s making a mess of work, his family, his liver, his lungs, and more than a handful of sexual encounters. This isn’t the high life, no—Baxter is so out of it that he can’t even seem to consider enjoying himself.

If anything, the life he led is a decadence so profane [or deliberately profaned] that it had such the potential to kick me in the solar plexus—but then Baxter decided to do a disservice to himself, making him, well, loser-ly. Although Baxter’s honesty is laudable—if only more writers could be so brave, so ruthless to themselves!—overall, the book feels like a desperate attempt to structure his ennui. It’s a life both blah and unbelievably decadent, a dichotomy he failed to capture in his writing.

Two voices here, then. First, the one-tone brusque pathetic-ness that was like sludge: I found that I was not interested in his life of monotony when he couldn’t strike a balance between a voice that reflects the experience and a voice that invites the reader to stay with him—any reader at all, regardless of whether that reader would end up liking this book or not. Such dispassion! It would have been chilling if Baxter managed to convey—categorically—that this dispassion has bled through every facet of his life, that of course it would be in his autobiography.

Moreover, in this kind of life, it’s unsettling to have such a no-nonsense exposition. But it’s damnable when it repeatedly gives way to [the second voice:] moments of Utterance, the I will say something quotable, and I will intone it thus. I loved those moments at first, because I like words—but eventually, with the monotonous debauchery, the I am not even interested in my own life kind of telling, the sudden appearance of a Grand Statement About Life was just so goddamned annoying.

I was not trying to kill myself. If I were ever going to lie, that is the one I would tell: that the one truth left on earth is death—that dying is the carnal expression of honesty, a moment of tangible truth. But my onslaught was not a veneration of death. It was a veneration of disillusionment. I pushed myself because I wanted to pour poison into my history, kill it, wrench the hypocrisy out. And live with whatever was left, as the most honest man on this earth—I had already been the most dishonest. But an appreciation of death—a real one—is a softer, calmer equation. It is not explosive. It requires deliberation. It is a high, calm fearlessness. It hates all infatuation. And in the face of exhaustion, it tires. It needs sleep.

Funny how Baxter hints at writing being the place where his disillusionment first manifested itself. When before, at the golden gates of literature, he felt like he mattered, that he “was finally part of something,” that he “could lead something large and magnificent”—that he was going to make a difference—and now, well, in this book, he tells us, quite simply, that he has stopped fighting:

To commit an act of violence on art or abandon it: it is the same thing. I want eliminate art from my concerns, so that I rid myself of small thoughts. I will live and create wholly. A man who does this—and perhaps I will never be that man—re-emerges from the fraudulence and carnage asymmetrical, ugly, and contradictory, and lives as a totality, himself. I loved the disfigured, the monstrous. All the books I admire are ogres—flawed, imbalanced, savage. They enhance me. Everything else reduces me.

That he resolved to disclose the darkest aspects of his life and risked the judgment of multitudes—that he’s peppered his autobiography with manifestos both hardy and hollow—that he rallied against writing using writing itself as his weapon—only to end up with a disparate and still lackluster attempt to bring dignity to his pathetic-ness, only to fail to write the best way that he can to give justice to such an honest venture—that is what bothers me.

But I don’t think my opinion will bother Baxter—and, mind you, I wish him well, I really do. Baxter’s hardy, he’s proven that. Besides, in his own words:

A man who believes in his own inviolability can withstand any cruelty, any form of humiliation imaginable.

And I believe you, sir. That’s something, right?