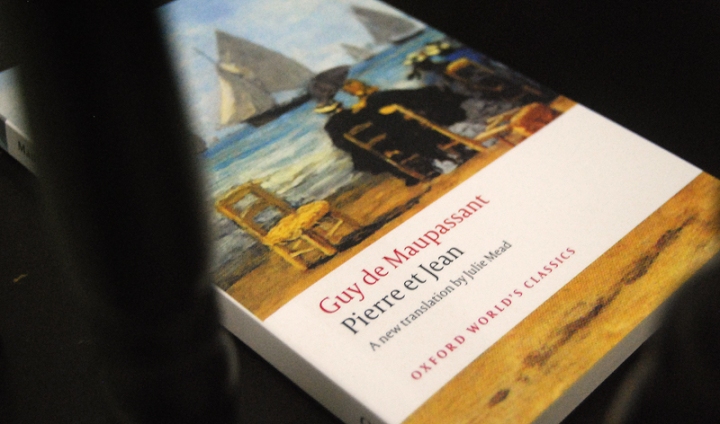 Why do stories of two brothers—or two sisters—[especially] insist on contrast and comparison? Because they’re knee-jerk, they’re instinctive, they’re human nature? In literature, authors tend to go on the route of fairy tales or parables—if not legitimately or in structure, then in tone, or feel.

De Maupssant’s short novel feels like that. It’s almost too easy to compare and contrast—the author gives us two brothers, standing side by side, from the get go. It’s almost like an invitation. One brother, the younger, Jean: “a model of gentleness, willingness, and equanimity.” His older brother, Pierre: “impetuous, intelligent, volatile, and stubborn, full of utopian views and philosophical ideas.”

And here comes the pot-stirring, the possible conflict—which, you can be assured gives way to an actual [if largely psychological] one later on:

But a kind of jealousy, the sort that lies dormant and grows almost unseen between brothers or sisters and which only surfaces in later years when one of them marries or receives a stroke of good fortune, made them aware of a fraternal and harmless antagonism between them. Of course they loved each other, but each watched the other closely.

So it’s there. A relationship that’s naturally volatile. You’re brothers, you’re different from one another. Actual conflict comes in the form of an inheritance from a friend of the family—for Jean alone. Hasn’t Monsieur Maréchal expressed love for them both? Why just Jean? Someone has to enlighten Pierre—he’ll welcome any explanation, something to justify his jealousy, his anger.

The reader is, of course, quick to come to a conclusion: Jean is Monsieur Maréchal’s son. Pierre’s mother loved a man other than his father. Jean and Pierre, brothers most of their lives, suddenly are not.

What’s particularly impressive—and affecting, yes—about the novel is that it’s all mostly from Pierre’s point of view. Yes, most of the painful parts are: Pierre, alone, in his mind, has to deal with the possibility of his family unraveling. The people around them reveal themselves, mostly because what’s going on in Pierre’s head is so painful that it cannot be contained. People are made purer, or uglier.

So, yes, at the beginning, we’re invited to cast arbitrary judgments. But the conflict Pierre goes through, alone—it’s not so much that it inspires sympathy. I was simply, well, forced to think with Pierre, and go beyond those arbitrary comparisons and contrasts.

His family! For the past two days some unknown, evil hand, the hand of a dead man, had torn away at and destroyed, one by one, every link that bound these four creatures together. He had no mother, for he couldn’t love her anymore, not being able to worship her with that absolute, touching, and devoted respect which a son’s heart must have. He no longer had a brother as he was the son of a stranger. He only had a father, this great lump of a man that he just couldn’t bring himself to love.

[There was quite an internal struggle for me to not make Team Pierre and Team Jean banners and shirts. Although I suspect I can probably go on and on discussing the merits of both, um, teams.]

[PS.01] I first read de Maupassant in high school, with his short story, “The Necklace.” It was difficult to describe to my Lit teacher—Mr. Johnson O. Saet, I wonder where you are now?—the sheer, impotent frustration and distress that overcame me upon that story’s ending, how badly I wanted to shake these people (Mathilde especially!), how badly I wanted to tell them to Goddamned tell the truth already and stop being panicky ninnies. And, I suspect, that within two minutes of that conclusion, I was already devising possible solutions to unearth that unfortunate couple from the muck of Big Misunderstanding. Okay then.

[PS.02] This Oxford World’s Classics edition includes de Maupassant’s [planned-as-tangential] preface to the novel—the essay called, well, “The Novel.” My crush on this essay is lengthy—so are my occasional arguments with it—but here are two excerpts that made my heart flutter:

In the essay, de Maupassant, too, recalls words of advice from mentor and friend Gustave Flaubert:

I don’t know whether you will have talent. What you have brought me demonstrates a certain amount of intelligence, but don’t forget this, young man, that talent, as Chateaubriand said, is only lengthy patience. Work. . . .

Talent is lengthy patience. It is a question of looking at anything you want to express long enough and closely enough to discover in it something that nobody else has seen before. In everything there’s something waiting to be discovered, simply because we tend to look at the world only through the eyes of those who have preceded us. The most insignificant thing contains something of the unknown. Let’s find it. To describe a fire burning or a tree on a plain, let’s stand facing that fire and that tree until for us they no longer look like any other tree or any other fire.

One thought on “One more tale of two brothers, and de Maupassant on the novel”