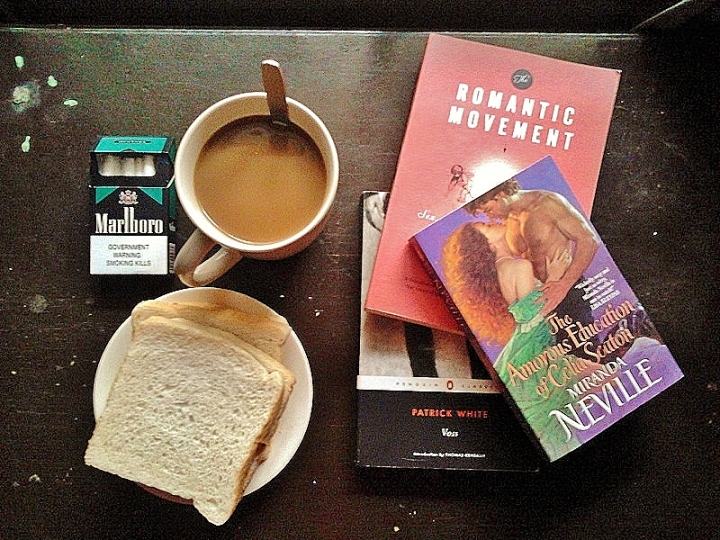 “When it comes to a good book, the good bits are always worth reading again.” – From The Amorous Education of Celia Seaton by Miranda Neville. I very much agree.

No work yesterday on account of the rage of a typhoon. I mostly stayed in bed, huddled under a thin blanket, trying not to touch the too-cool walls. Hello, day of reading delivered by the unfastened heavens—my grand plans and good company pictured above. Three books made the finals—I’d been reading the Patrick White and the Alain de Botton for the past couple of days now**—but I spent most of the remaining afternoon light [crash-banged by the wind and rain] reading Miranda Neville’s The Amorous Education of Celia Seaton. The weather demanded that this was the book I read, as did my fetal position underneath inadequate blankies. I had fun. Shrug.

It’s my first Neville, one bought on impulse. It lends itself to my impulse buys, at least, See, I have a disconcerting fondness for the romance-noveliest of romance novel covers, and this one tickles me. That, and the title, had me grabbing for the book—it’s so lofty, and I love me some lofty. The info at the back mentions dirty books in the hands of our heroine, and, well, that was just too apt to pass up, haha.

It was fun. Not as trope-busting as I would have liked [and as had been claimed], but it was an afternoon well spent. It involves kidnapping and dandies and amnesia and at least two forced engagements and some rivals here and there and annoying aunts. The details and the loose structure and the sequel-bait characters [so endemic, unfortunately, to the novel-series thing, sigh] made this one far from being a good novel—but, nyeh, it was fun. There are a lot of good bits, and I did reread some of the good bits once I was done with the book, but, nyeh—I’m not inclined to talk any more about it. 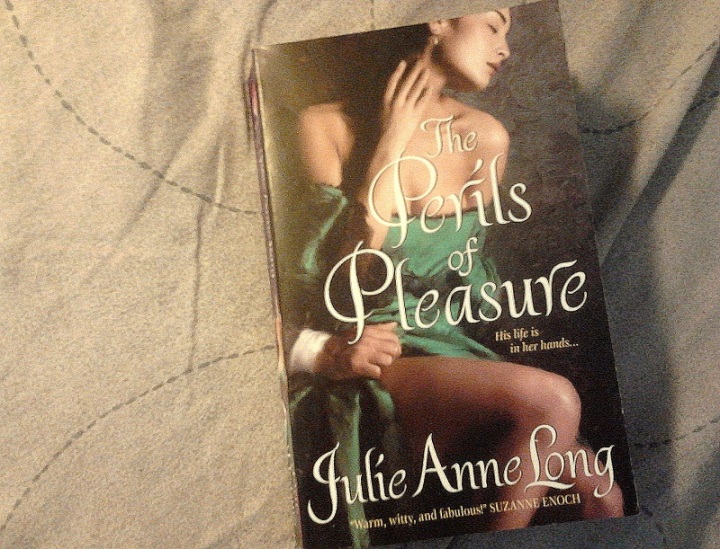 But I did have fun with a very very very good book, one that hadn’t been in my plans at all—The Perils of Pleasure by Julie Anne Long. [The sheer drama of that title has me giggling!] [Though the cover is sexy, disembodied hand notwithstanding.] I read it because I was stupid enough to believe that I could read a book to help me sleep, and by its end what crazy birds were out in the weather were chirping and I couldn’t feel my toes anymore and the nightlight was hurting my eyes and it was this morning and oh shit do I have to go to work later?

The nitty-gritty, first. Madcap charmer Colin Eversea is about to hang for a crime he didn’t commit. Madeleine Greenway, widow mercenary, saves his life with a spectacle that could rival Guy Fawkes’ machinations. They both find out, soon enough, that whoever hired to save Colin wanted to rid of Madeleine after the deed was done. And so they set off on an adventure, which involves a lot of secrets and grudges and hiding in dark places—countesses welcoming bewigged footmen into their bedrooms, doctors paying for dug-up cadavers to dissect, the bones of a seven-foot man, more disguises, more gunfight, some redcoats, and a family feud that harkens from 1066 [over a cow, some say]. It’s a road trip, it’s a treasure hunt, it’s an obstacle course—complete with deadlines to meet, retributions to deliver, and names to clear.

Exciting things. Things I normally hate in my historical romances, because authors tend to allow the plot to overshadow the characters and the romance that’s supposedly between them. But this book? For something so objectively jam-packed with action and intrigue, there’s an undercurrent of calmness and pragmatism and simplicity and inevitability between the companionship of Colin and Madeleine. They naturally can’t trust each other, but they’ve been thrown together out of necessity. They truly need each other to survive. And then it transcends the immediacy of their situation. They discover their true aloneness, and, hell, they discover that to assuage that, they really need to be with one another. You witness the natural progression of their relationship—the pesky needing, that necessity, the eventual companionship, the friendship, the desire, the love. The standing brave despite the terrors of loving. [It seems petty to point out that their first kissing scene occurs at the 279th page of a 375-page novel—it’s a first kiss well-earned, well-introduced, well-delivered. But there it is.]

Does it have flaws? I don’t know; I don’t care. It’s a gorgeous book, so understated, so surprisingly quiet. The writing so goddamned accomplished. Long knows when to let the narrator speak, and when to let the characters’ dialogue carry the story forward—and there’s no loss of personality. These are contemplative characters, and we come upon them at critical points in their lives, individually, and caused by the other’s presence. With the writing, you witness doubts, decisions made, feelings unraveling and making themselves known. It’s such a generous treatment, such a mature handling of a romance that I am still in awe of having experienced it.

It was such a good way to welcome the day, such a good book to spend the night with. Storms a-raging and thin blankets notwithstanding.

** My ongoing love affair with Voss—a love affair I can’t believe I’m savoring, haha—and my fascination with The Romantic Movement deserve blog posts to themselves. I’ll get there. Let’s take this slow. Besides, the romance in Neville and Long’s stories are quite different—in mood, in tone, in intention—to the stateliness of Voss and the 90s love-philosophy of de Botton’s, and I’d collapse in the attempt to bring the four together in one messy, messy blog entry. Oh well. See you soon.