Why, yes, I forgot I had a book blog. Nothing new, really. Although, after the bibliographic flurry of the last weekend, I came to the startling realization that I had other interests—like, um, a computer game that involves building a Roman city from scratch, and zombies, and Downton Abbey.

And, well, I’m not missing reading too much. I look at my shelves, smile sunnily, realize that they haven’t been clamoring for me, shrieking from their confines. [In fact, the past couple of the days, my usual reading buddy put on her judge-y face and asked, “Why aren’t you reading?” And I shrugged and said, “You know, I’m kind of chill not reading.”] I’ll pick up a book soon, it’s nothing to worry about. I’ve had the urge, though, to read and commit to a fat book—a fat, consuming book. The Pillars of the Earth is grinning smugly at his shelf-mates, as is The World According to Garp. And, heh, Memoirs of My Nervous Illness. I’m not ready for all that yet, but, you know, I’m chill.

I did read some really good books last week—Eileen Chang’s short stories, Bauby’s heartache-y memoir, Eugenides’ beautiful spectacle of I Do Not Know Yet. I’m biding my time, though, to talk about them. So, yes, the next time I remember having a book blog, I’ll attack those books.

Three books to dust off this blog with, now. The books below, for posterity’s sake—they’re not AwesomeSauce, but they’re not icky books; I guess they’re good books? Good, in a “Yeah, shrug” kind of way? Although, of course, I expected them to blow me out of the water—aren’t those normal reader expectations? Bleh. They’re just, you know. Shrug.

Take Alain de Botton’s The Romantic Movement, which I bought because de Botton is auto-buy, and especially because this hints at the wonders his On Love wrought on me. I hate to pull a comparison between the two, but if a brawl broke out in a seedy bar somewhere, On Love will throw chairs and knee groins, and The Romantic Movement will be ensconced in a corner table, surveying the proceedings with a sniff-ish air. 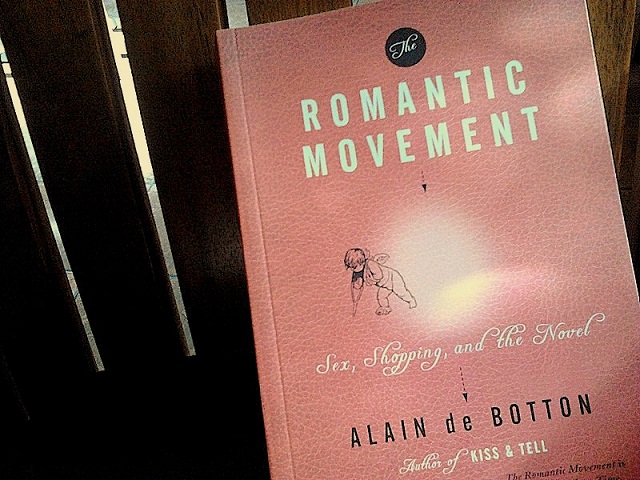 Like On Love, The Romantic Movement—subtitled “Sex, Shopping, and the Novel”—is an examination of a trajectory of a love story. Our girl’s resigned, bitter, idealistic longing for a soulmate. Our guy’s casual breeze into her life. How they fall in love, or how they say they fall in love. What makes it a de Botton novel is the author’s constant intrusion: Shopping will summon Emma Bovary, wine-tasting might summon Proust.

The main difference, though, between TRM and OL is that the latter made you invest in the characters, the people involved in the love story the author-narrator is dissecting. TRM looks at them as specimens, sometimes as vehicles for theory and embodiments of Perfect Examples of X—they were rarely actual people for me. I suspect TRM is more detached, if colder. There is the same erudition, of course, the same breathlessness for the language. But the tone and treatment can make you cringe with unease at times. These characters are bugs, and you’re just peeking into the Petri dish with de Botton over there.

Also. Loretta Chase debuted a new series with Silk is for Seduction—about three sisters who are dressmakers. This one’s about the eldest who plots to get the nearly-affianced Duchess of Something or the Other on her client list, because, damn, that will ensure her shop’s success. How does she go about it? By being all vamp-ish and court-y over the Duke. Whose pending-bride she wants to dress. Okay.

Guh, I don’t know. I liked the vibrancy of the heroine, how ruthless and conniving she could get. I did appreciate having a historical romance heroine who had a profession, and is quite good at it, thank you very much. But though I like those, I know—I felt—that they just didn’t make good romance fodder. I mean, she and the hero have no quiet time together. Shit’s always happening. Moreover, I felt that, ugh, her profession and her shop—and, you know, that little business about the class difference—stood in for their love story. How Marcelline [I think that’s her name, haha] fought for her profession, how good she is at it, and, later, how the Duke got all helpful and shit? Yeah. That was their relationship.

The writing was accomplished, the detail that went into making a credible dressmaker was impressive. But did I roll around the bed squealing over this book? Did I giggle like an idiot, or cried like one in Angst Timez? Nope.

And then there’s Margaret Atwood’s The Penelopiad. This was just not my kind of book, although I did went all giddy at the thought of retelling Penelope’s story—or, at least, offering a rightful elaboration.

But I should’ve known there would be a Relevant Social Message crouched in the trappings of the myth. Which, by the way, was told in a too-prosaic language for my sake. [By the way, “The Odyssey meets Desperate Housewives” is just not my kind of cake.] Maybe the disconnect between these two factors—the agenda and the delivery—turned me off? Maybe I just wanted a myth-retelling to roll around in? Because, dammit, from what I remember in school, I really loved Penelope. So, yeah, I wished this had more, well, weight. More stuffing. More.

If you’re still with me, I suppose you’re thinking that it’s no wonder I don’t want to read. Heh. But no, no, I’ve got good books under my belt, and I can’t wait to share them with my cobwebby white space in my corner of the Interwebz. Just, you know, after I build an Olive Farm. And maybe see what else the Dowager Countess is up to.

3 thoughts on “A little bit of this and that”