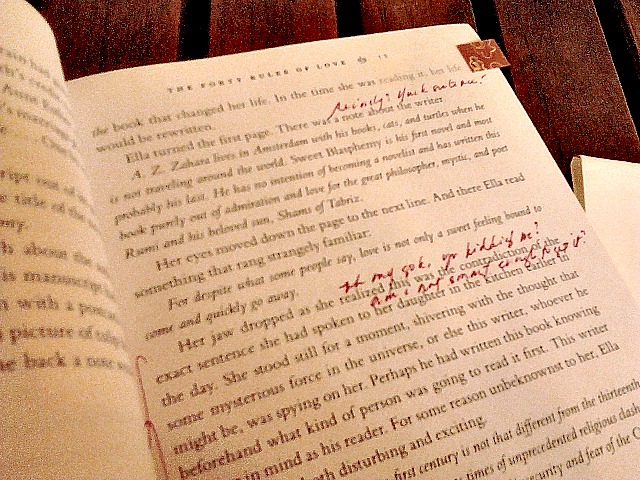 A screeching commercial in between my attempts at “normal” book blogging! Aherm. Among my current reads is The Forty Rules of Love by Elif Shafak. I bought it on impulse [naturally]. I am yet to reach the twentieth page, but already the outrage had me careening to WordPress, to y’all.

Here’s the gist: Ella Rubenstein, recently accused of being an unhappy housewife, needs to read a manuscript for her new job. Goody for her. The manuscript’s called Sweet Blasphemy, and it’s a novel on mystic poet Rumi, and its title is cringe-inducing. Anyhoo. She gets into an argument with her eldest daughter, who wants to marry because it’s lurve, and later, Ella finally settles down to read the manuscript. Thus:

Little did she know that this was going to be not just any book, but the book that changed her life. In the time she was reading it, her life would be rewritten.

Are you fucking kidding me?

The alarm bells went a-clanging with this snippet of sentimental, graceless tripe. This was not being self-aware, this was being so incredibly yucky with schmaltz and Lifestyle Network kind of epiphany. This so does not help my bored-grumpy mood.

Ah, but there’s more. Because Ella actually begins to read the manuscript:

For despite what some people say, love is not only a sweet feeling bound to come and quickly go away.

Her jaw dropped as she realized this was the contradiction of the exact sentence she had spoken to her daughter in the kitchen earlier in the day. She stood still for a moment, shivering with the thought that some mysterious force in the universe, or else this writer, whoever he might be, was spying on her. Perhaps he had written this book knowing beforehand what kind of person was going to read it first. This writer had her in mind as his reader. For some reason unbeknownst to her, Ella found the idea both disturbing and exciting.

Seriously? Really, now? Why are you doing this to me? Why are you supposed to be a really good book? Why do I want to cackle at you, and then slink off under a shower to sob? How does one move forward from this? How?

5 thoughts on “This is getting me grumpier”