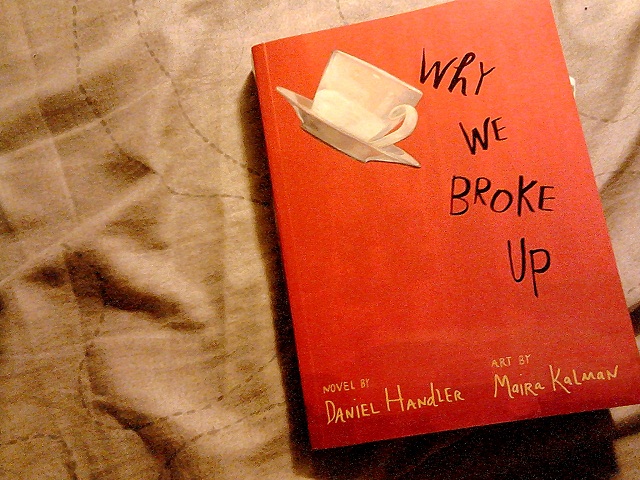 I don’t want to write a defense of Daniel Handler’s Why We Broke Up, which is an affective novel for all its flaws—and is a visual treat too, thanks to the art of Maira Kalman. I can’t seem to reclaim the ease of simply talking about a book and the experience of reading it, and also, yes, the relevant bits of my personal history. Perhaps it’s detrimental to my sanity that I’ve lurked too long in book blogs and a bibliophilic networking sites, when I don’t have an outlet for my own thoughts. Or, well, when I don’t have the time to arrange my thoughts in a coherent, palatable manner.

The first drafts of this post was basically a response to how other people read this book, particularly choices consensus on its conceit, its structure, its problematic voice, the interplay of the text and the illustrations.

And then I realized that was a bullshit way of reviving this blog, this reactionary bent. I, personally, like to pretend that I and my books exist in a little bubble—and, occasionally, other people and their bubbles brush against mine. I’m cool with this, I like bubbles. They are clever little structures, despite their fragility.

So. All that aside, what I basically thought of Why We Broke Up was this: It is so very young. [That is, I am 22, and I felt like a nostalgic crone while I was reading this book.] I think Handler+Kalman successful captured the tenuousness of youth, as well as its boundlessness. And also, I’m willing to bet, its tenacity. This book is about young love and about young heartache, and its told by a very young person lost in her emotions and, later, trying to make sense of them in however way she can.

The conceit is this: The book is Min’s catalogue of the objects she has salvaged from a short, but no less emotionally expansive, relationship with Ed. Every trinket has a story, and as Min weaves the story of their young love, so does she show us—and Ed, especially Ed—how it faltered. Her narration is vulnerable, in the way some of us become more tender when hurting. It is defiant. It forms a spectrum of boundless exuberance, invincibility, and goddamned self-deprecating chants of Oh, why did I love you?—and this voice, the teetering between one wild emotion and the next, the small pockets of quietness that allow for a greater strength to grow—this is Min’s voice. This, I suppose, was my voice years ago, as it was the voice of many of us when we first loved, when we first hurt, and, later, when we wished to tell those who’ve hurt us—This is what you do to me now, but you I rid you the power of doing it to me ever again. 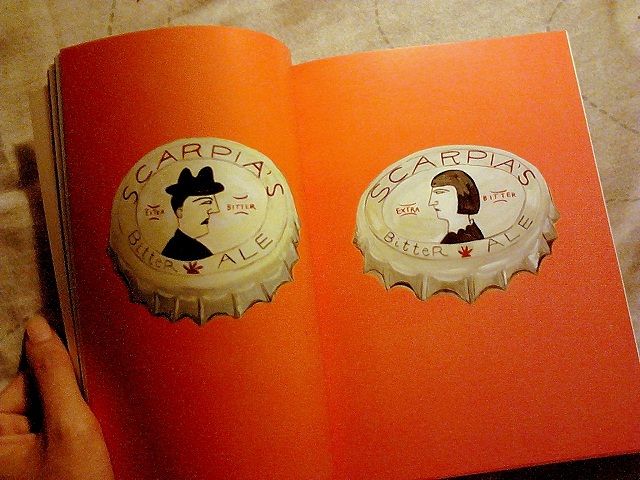 I am trying to describe Why We Broke Up to a friend, to a notebook.

Why do you have this book? I bought this because it had been a long day, and the light yellowed the interior of the bookstore—and here was this book, this uneven red, and that plaintive title. I picked it up, and found comfort in its heft. I riffled through the pages, and words and colors blurred before me, and that harken-to-childhood smell of glossy paper lifted toward me.

And what was it about that red? It was paint smeared against paper using a wide brush, the white of the base coat gleaming under the right kind of light.

Why did you read this book? For the reasons above, and because I like to believe I was this young once. That once I could claim innocence, revel in the invincibility of my naïveté. That I once stole my mother’s jewelry box emptied of its pearls and 80s copper baubles, to store the invitation to a prom, a withering corsage, a crumpled note, a candle and the ribbon twined around it. Because I thought it would matter, and I needed a gallery of the tactile to remind me, at will, that I was in love.