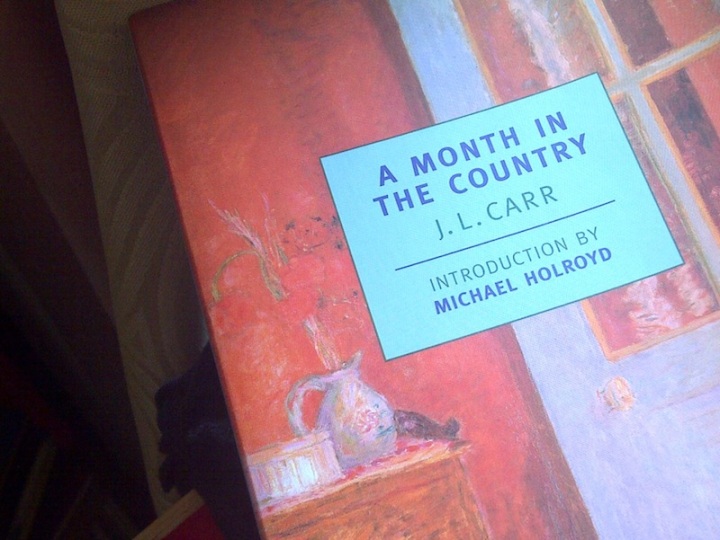 I have been lurking in a Goodreads reading group set up by NYRB Classics. Funny thing about group reads, even those you simply lurk in: The sheer pressure that accompanies the reading when it’s not going so well for you. That is, in the case of J.L. Carr’s A Month in the Country, it helped me pass the time well enough, but I wasn’t as taken by its quietness, by the consciously parochial contentment in the pages. I read this in a time of great upheaval, and it was simply too slow. It couldn’t keep up the raging inside me—it was too idyllic, the characters too insulated. Never mind that it made perfect sense for them to be that way. The main character, in particular, is driven to the country because life as he knew it in the city had fallen apart.

Not so odd, I suppose, that the facet most alive in this novel was the medieval wall-painting Tom Birkin had been tasked to restore. The marked contrast between that painting, so very vivid, and the man under whose hands it would be resurrected—the country they were in, and the trivial preoccupations of its people. Read the gradual uncovering:

By the end of the second day a very fine head was revealed. Yes, a very fine head indeed, sharp beard, drooped mustache, heavy-lidded eyes outlined black. And no cinnabar on the lips; that was a measure of my painter’s caliber: excitingly as cinnabar first comes over, he’d known that, given twenty years, lime would blacken it. And, as the first tinges of garment appeared, that prince of blues, ultramarine ground from lapis lazuli, began to show—that really confirmed his class—he msut have fiddled it from a monastic job—no village church could have run to such expense. (And abbeys only took on the top men.) But it was the head, the face, which set a seal on his quality.

For my money, the Italian masters could have learned a thing or two from that head. This was no catalogue Christ, insufferably ethereal. This was a wintry hardliner. Justice, yes there would be justice. But not mercy. That was writ large on each feature for when, by the week’s end, I reached his raised right hand, it had not been made perfect: it was still pierced.

This was the Oxgodby Christ, uncompromising… no, more—threatening. “This is my hand. This is what you did to me. And, for this, man shall suffer the torment, for thus it was with me.”

See what I mean? This was what pushed me through the book, a glimpse of the Oxgodby Christ, his attendants, all his minions that cowered before him. I wanted more of those colors reinvigorated with Birkin’s brush. This novel, for me, mattered so long as I saw this painting. I cared not for the people that pursued their mundane desires about it; I don’t even remember what happened to Tom Birkin and his merry gang. This was the painting that beckoned, and how furious it was. This was why I read on.

PSA: I bought A Month in the Country at Powerbooks for Php515.

3 thoughts on “The Oxgodby Christ”