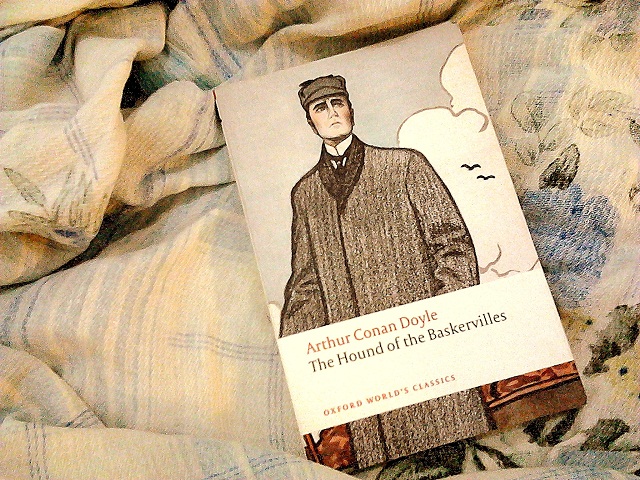 NOTE: Part one, perhaps, of my thoughts on The Hound of the Baskervilles, as a week after reading this, I toddled towards Bayard’s Sherlock Holmes Was Wrong, which offers an alternate conclusion. Not necessarily a bad thing, mind you, but one that’s melded two experiences of the same book.

A hound it was, an enormous coal-black hound, but not such a hound as mortal eyes have ever seen. Fire burst from its open mouth, its eyes glowed with a smouldering glare, its muzzle and hackles and dewlap were outlined in flickering flare.

As soon asI’d plunged into my love affair with the exploits of Arthur Conan Doyle’s consulting detective and his trusty chronicler, The Hound of the Baskervilles began to worry me—way before I’d gotten to it. I knew about The Hound, of course, though only in the vaguest sense—frankly, from what I’d picked up from pop culture and the odd adaptation here and there, it involved a giant dog that ate people. [This has King’s Cujo written all over it, haha.] Yes, I couldn’t be more wrong, but the point is: There’s something so incredible about The Hound; and I’ve come to learn that the world of Sherlock Holmes and Dr. John Watson is so firmly rational, that any foray into [and even a mere hint of!] the paranormal has me scratching my head. [Don’t get me started on the conundrum that is The Lost World peering at me from my bookshelves with its dinosaur-laden cover.]

Fear is the tale’s lynchpin. Though preternatural hounds and a family curse form the foundations of Holmes’s new case, The Hound is a story of how fear kills—how the very idea of something monstrous in the shadows can be lethal, and how sly little villains can successfully seize on that facet of human nature. And, of course, it will take the straight-spined rationality of the Holmesian world—of Sherlock Holmes himself, and the as-vital-as-ever Watson—to reinstate order in the moors.

Ah, the moors. As Watson himself notes to Holmes, “The longer one stays here, the more does the spirit of the moor sink into one’s soul, its vastness, and also its grim charm.” Doyle, too, plays us well, employing a bleak Gothic tone, a graver and more ominous atmosphere. At the very beginning, we [reader + characters] have no idea what we’re up against, and as the story moves forward, we are stripped of familiar anchors: Holmes, for most of the story, is gone—we are left with the correspondences and personal chronicles of Watson. We’re as stuck as him smack-dab in the middle of this grim, foggy plain—with a looming house of secretive characters, a murderer hiding out in the forest, and the ever-present hound.

The change in tone and in the usual haunts of our duo makes for spectacular scenes, among them what must be my favorite moment of all Baskervillian time—if not my favorite portrait of [spoiler alert] Mr. Sherlock Holmes:

The moon was low upon the night, and the jagged pinnacle of a granite tor stood up against the lower curve of its silver disc. There, outlined as black as an ebony statue on that shining background, I saw the figure of a man upon the tor. Do not think that it was a delusion, Holmes. I assure you that I have never in my life seen anything more clearly. As far as I could judge, the figure was that of a tall, thin man. He stood with his legs separated, his arms folded, his head bowed, as if he were brooding over that enormous wilderness of peat and granite which lay behind him. He might have been the spirit of that terrible place.

I assume that numerous papers and weighty analyses have been churned out due to that one passage alone—the very symbolism of it is fertile ground. Holmes’ usual aloof self, magnified into horror-hinting proportions. How circumstances and [necessary] secrecies have brought him farther away from even Watson. The arrogance of the pose, the suspicion that he knows a lot more than he lets on—or, perhaps, is as quietly bewildered by the events unfolding before him.

I’ve gone and excited myself now, recalling the book’s effect on me—though I still can’t quite shake off how unsatisfying Holmes’ solution is, his answer to our problems. As much as I liked the book’s bleakness, and how Doyle took advantage of it to chilling effect—emphasizing, again, the inescapable shroud of mystery—I couldn’t help but go “Eh?” to our conclusion. My questions piled up as Holmes rattled off his explanations. The hound’s supposed supernatural-ness is fittingly put in its place, yes, but that nagging question of human motive goddamned chafes. Holmes pointed out perpetrators to our crime, sure, but it just didn’t fly with me. Quite frankly, it didn’t much make sense: You’d kill someone in the hopes to inherit, never mind that you’re not quite next-in-line? And even when you do kill the heir, you have to shed the character you’ve assumed all this while and reveal your true, Hey-I’m-the-Next-Heir-Guys identity? It makes no sense.

Sigh. Bayard, though, helped me worked out this disquiet. And though I don’t fully agree with him—he all but called Doyle a dodo, haha—I am grateful to know that I’m not the only one scratching my head over our supposedly infallible detective.

One thought on “‘Mr Holmes, they were the footprints of a gigantic hound!’”