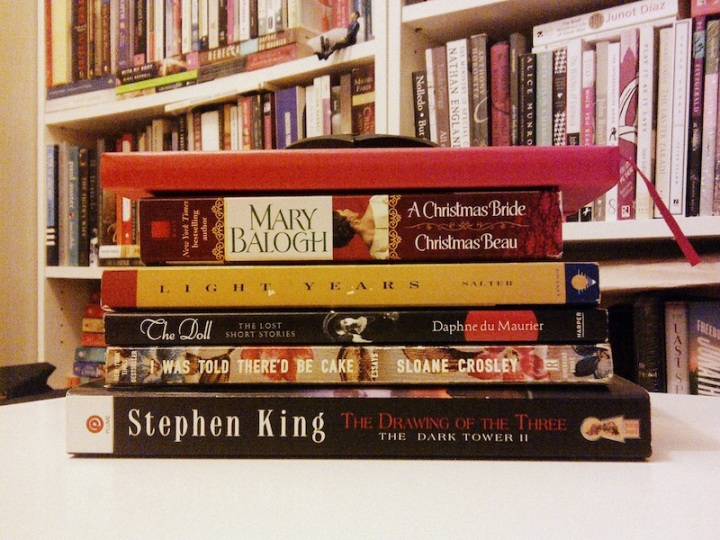 Since I last checked in with you, dear corner of the internet (the weekend feels like it’s been ages ago, haha), I finished reading Sloane Crosley’s collection of personal essays, I Was Told There’d Be Cake—began because of her piece on keeping a calendar. To be blunt about it: It’s a mediocre book of essays, the only thing tipping it onto Terrible territory is that it had the audacity to be published. No hard feelings, though, as I read the book in between naps Sunday afternoon, the onset of migraine insisting that I subsist on something that would not demand too much of me. That is: I needed to read, but I didn’t want to go to my other current reads with less energy and attention than they deserved. Hah. Anyway, I’ll likely not read any Crosley after this, so whatever.

It feels like I’ve been reading Light Years by James Salter for weeks now—not something one would say in lieu of a hearty recommendation, I know. I’m beginning to fear that I can’t respond to its demands the way I should. (An alarming thought at the back of my head: Since Salter’s been dubbed “a writer’s writer”—well, put two and two together, Sasha!) Most of the time I spent with Light Years is spent bracing myself to be impressed, but the expectations are doing hokey things to my system. I can’t quite put my finger on why I’m not loving this one to bits and pieces—although I’m still waiting for things to turn around inside me. Yet again: We shall see.

I’ve sensed this same lack engagement with A Christmas Bride by Mary Balogh. Then again, I have been literally reading it with just one eye, a poorly functioning one at that [all hail the migraine!]. I have the utmost faith in Balogh’s writing, however, and what one flaw I’ve encountered in the book isn’t even her fault.

See, very early on in the book, Mr. Downes and Lady Stapleton get it on—which I’m fairly certain is kind of risqué for the nineties (educate me, otherwise?). And during this metaphor-filled encounter, I found myself wishing that this book had been written now. Because that first scene signaled a relenting in both characters. I mean, she’s not the widow-archetype we keep seeing (or are hinted at, usually in a very ton-like slut-shaming little aside, haha) in romance novels, although she’d like Mr. Downes to think so, and Mr. Downes is as stiff a gentleman as I’ve ever encountered (well, I like you, Mister!). I mean: I just regret that the sex wasn’t written in a way that does justice to that relenting. And this is not the pervert in me talking, okay? So, there.

I’ve also dipped—well, waded, actually—into The Doll, a collection of Daphne du Maurier’s “lost” short stories. Not that they’d never been published, nope—they just haven’t been collated, I suppose, for modern readers? Myeh, I don’t know. It feels like this reissue, so to speak, warranted a more thorough “Note on the Text” than the afterthought that’s in this book. Couldn’t the editors have provided me with a rousing essay on du Maurier’s legacy and the provenance of these stories? No? Okay, then. (For the short stories themselves, I’m going to have to save the sheer wtfuckery for the next post—they deserve a post of their own, haha.)

Lastly: I picked up The Drawing of the Three, the second book in Stephen King’s The Dark Tower series, because I wanted something hefty that would take me away from the bad juju flying around today. And so when Ronald wakes up at the beach (where The Gunslinger, first book, ended) and starts being eaten by the scariest, most ridiculous demon lobster in literary history—the man gets two fingers and a toe eaten, for fuck’s sake—I was thankful for someone to sympathize with, someone who made me think, “Well, he’s more fucked than you are, girl.” See, after being all, “I see serious problems ahead,” at page twenty, Ronald goes, “I jerk off left-handed, at least that’s something.” Yeah, let the Gunslinger remind you look for the bright side, Sasha.

I had this opening paragraph about what a terrible day I’d just had, one that’s spurred me to review my life choices the past year; a day that began with a megrim, progressed with dread, and climaxed with a deep loathing for humanity. But here I am. I just wanted to talk about my reading, one of the few things keeping me sane—I just wanted to talk about my books because, that way, I feel like I’ve done something worthwhile with my (inner) life. So, please, carry on, dear readers and the Universe; I still have to figure out not to hate the world beyond my books, beyond The Fortress of Solitude, in time for tomorrow. [That said, I’m bringing the King with me, dammit.]