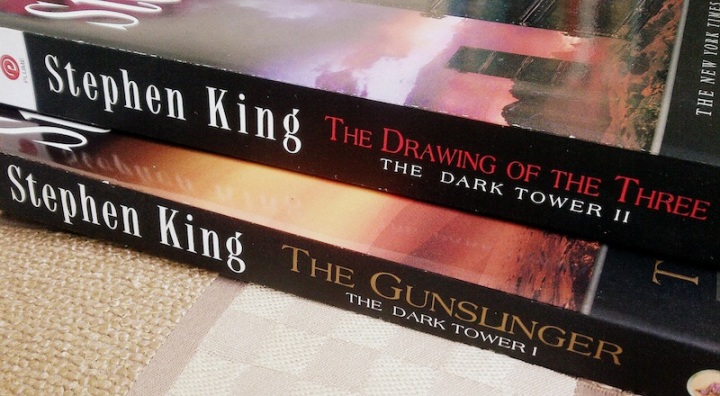 Last November, in an attempt to make her proud, I told my mother—the woman who read us Stephen King for bedtime, the woman who made sure that no shelf would be found wanting of a tattered, secondhand King paperback—that I’d begun reading The Gunslinger. And she promptly set down her tea and gasped: “Why haven’t you read—? Oh my god, you haven’t read The Dark Tower series.” [The subtext, of course, went along the lines of: “You are no daughter of mine.”] And then we proceeded to gush over Roland of Gilead, because that’s the only way to react to Roland of Gilead.

The man in black fled across the desert, and the gunslinger followed.

[That’s got to be one of the best opening lines ever.] The Gunslinger is a heady rush of an opening to the series, if a fragmentary one—that is: the more books one reads, the first part just kind of melts into a preface of sorts. Or, you know, a primer about Roland—he’s this guy stoically nostalgic for a time that has long passed and might never return, a guy who happens to be dangerous to the women he sleeps with, bless their souls. Yes, The Gunslinger ignited my fascination with Roland of Gilead, the last gunslinger in a world that has moved on—this bad-ass motherfucker of the most epic proportions. Argh, I love Roland, I love how good he is at what he does, I even love how he’s basically this walking-and-breathing myth; I love how he’s so uncompromising on the road toward the Dark Tower; I love how he carries himself before the many opportunities for either salvation or damnation thrown his way.

And that’s basically Roland’s Big Deal: He’s this lone ranger, driven by what-is-yet-to-be-revealed, but we’re there for the ride—and it’s either salvation for a man who still has generous dregs of humanity left in him (to his chagrin, sometimes) or complete damnation for a man you see on this quest to save a world that has moved on. Or, I don’t know—because Stephen King doesn’t want to relent, dammit, and give us deets.

Random things to use exclamation points for: Random massacre to prove bad-assery! Jake from New York and Roland’s lurve for him, despite the odds! Evil monkeys! The Man in Black! There are other worlds than these! Where are you going with this, King?!

This is the part I display the same flightiness when it comes to talking about book two, The Drawing of the Three. This book moves on from the nice little palaver Roland had with The Man in Black at the end of this first book, and in keeping with TMiB’s fortune-telling. (How’s that for ka, dear Plot Machine?) This is the book were Roland draws his little band of followers—eventual partners, really—mostly against their will, this is where we see how firmly the world of Roland and the world-as-we-know-it glance against each other. The Drawing of the Three, compared to The Gunslinger, just feels like the quest is truly beginning: You get your team together, you arm yourselves, you psych yourself up. Oh, and as I’ve mentioned before: This is one long stretch of suffering on the goddamned beach. (Fucking demon lobsters.)

I cannot emphasize enough how stressful this book was: The last gunslinger loses two fingers of his right hand in the first twenty pages of the book. The rest of the book proceeds with him fevered with the infection from the lobstrosities’ mangling, all while rounding up his team: Eddie Dean, a junkie with lots of guts and bills to pay, and Odetta Holmes, a civil rights activist who lost her legs at a freak accident, and who also happens to be schizophrenic. Yes. King proves, yet again, how loathe he is to let his characters off easy. (He’s already killed a couple, so what’s some beach-agony?)

But his ka-tet has formed, albeit with much difficulty. And there is more to come, things even Roland couldn’t have foreseen—but, oh, how he’d hoped for it. Oh, but I love you, Roland, I do:

The sun stained the east a dusky rose, and at last Roland, no longer the last gunslinger, but one of the last three, slept and dreamed his angry dreams through which there ran only that one soothing blue thread:

There I will sing all their names!

[Nope. Not making sense, no matter how hard I try. Reading these books is much too fun for a pesky little thing like sense. Things happen in these books! Awesome things!]

I’m a Stephen King fan. Not Misery-grade fan-ness, but just all-around love for the guy. I grew up with him and his books, returned to him as one would to a friend you just know’ll be there for you, serving up a platter of yum. For god’s sake, I read him with a flashlight under blankets. And though I won’t argue for King’s merits—because that’s just a hokey argument, and I’m obviously not mentally equipped for that right now—I will note how different this series is from the rest of his oeuvre. This is straight-up fantasy, with some nice dashes of genre-bending here and there: the post-apocalyptic, the steampunk-ish, the spaghetti Western, and (of course) the horror.

PSA 01: It’s January, which means it’s Long-Awaited Reads Month, which was cooked up by Iris and Ana. And I’m fairly confident this one—and the rest of the series—counts. Do join us and get to dusting off the books that have long been waiting on your shelves.

PSA 02: For more The Dark Tower love from two other Constant Readers, do visit Shelf Love. Here’s their post for The Gunslinger, and here’s for The Drawing of the Three. I remember looking on enviously when they did a read-along of the series two years ago, haha.

7 thoughts on “In Steve We Trust”