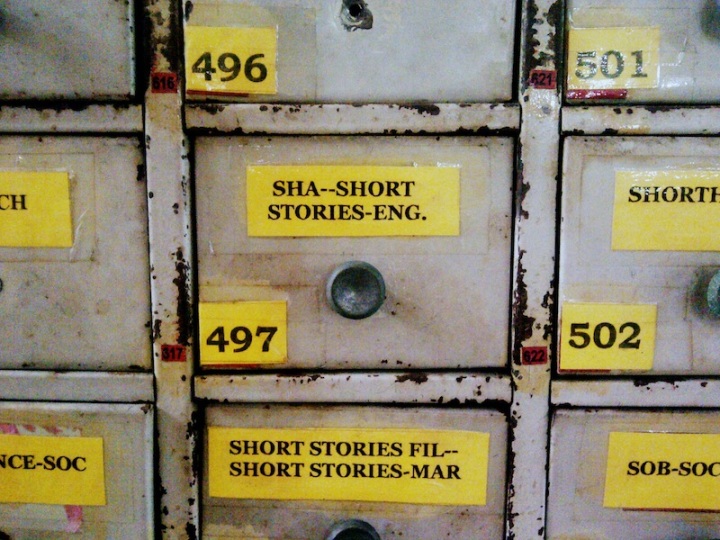 (Or: A manifesto on the short story as form, despite my own misgivings)

There’s been a lot of hullaballoo around the interwebz about the state of the short story. Curiously and gratifyingly, the two more famous ones—the New York Times’ rah-rah for the form that set my Twitter feed abuzz a week ago, and Laura Miller’s (recent) scathingly condescending retort—don’t offer anything about short fiction’s death, or non-death. Both are about the form’s popularity among a reading public that, by habit and/or taste, tends to overlook it. (I guess this is a good thing, as we hear enough of that kind of twaddle about the novel—undoubtedly, it seems, the short story’s much cooler older brother. It’s twaddle that, I think, just distracts us from actual reading.)

So, fine, yay, the short story’s not dead. Then again, it’s never been dead. It’s been neglected, it’s been laughed at, it’s been coddled and tolerated—most of the time it’s been passed over because, to quote many a reader, “Short stories are just not my thing.” Shrug. Occasionally, short fiction shines beyond its little conclave of devotees—and the outside world begrudgingly accepts these samples, as an established city might open its gates to seeming barbarians. And the acceptance is always despite the form: Oh, look at this amazing piece of literature, and it’s short fiction! Shrug, again.

But the short story has never gone away—mostly because, I think, no one’s bothered to organically initiate a lynching—which means it can’t contrive the comeback that will knock our socks off. (The flashiness thing, just not its style, man.) And it will never go away, because what short stories are very good at is simply existing, despite not having the Life—the humanity-saving gravitas—assigned so capriciously to the Novel. The short story is, because most of the time people leave it be. And it’s fucking thrived anyway. (An argument, I’m the first to point out, could be made for literature in general.)

Anyway. My friend Nash and I were talking about this earlier today, in exasperated whispers in a crazy-and-crazier workplace, as I rather uncharacteristically offered my two cents about the ruckus on my schizophrenic Twitter account [samples: 01, 02, 03]. And in that pocket of sanity Nash and I made for ourselves, I articulated something that I suppose I’ve figured out for myself long ago—one I suppose I can only draw out now because I’m both so fucking frustrated and fangirly-thrilled that we’re even getting our panties in a bunch. Over the short story—of all things to mind! (The grizzled short story is blinking its eyes against the glare of the spotlight: “What the hell are you looking this way for?” it asks, whilst trying so very hard not to smooth down its cowlick.)

Basically: What marks the short story as a form, as a tradition, is its inherent strangeness—which has translated, over the years, into sheer uncoolness. The short story has never, and will not likely ever, reach the exalted status of the Novel—which, at least, provokes those aforementioned nauseating conversations about its mortality. (Not to mention the badge of honor it’s shaped itself into being; why doesn’t anyone ever reach for The Great [Country of Origin] Short Story?]

We’ve looked toward the short story as the runt trying to play grown up, and halfheartedly at that—only at the insistence of the people who admire it, write it, or need to sell it. It’s just not cool, and it’s difficult to boot. The worse ones feel even more of an affront than bad novels—at least the latter have the grace to give us meat. The best ones sap us of response: All that emotion, all that effort, into so condensed and concentrated a package—Why the hell didn’t I read a novel instead?

The short story is something that even seasoned readers are loathe to poke, as though they sense that the form has never figured itself out beyond the boundaries it has set for itself. Poor thing. And lord, don’t even get them started on the average-of-ten-headed-hydra that is the short story collection or anthology. Off the top of my head: There are good parts in novels/novellas—but in collections, there are bad stories, and there may be worse scenes in each. With collections, you have to consider unevenness—you have to consider discreteness and unity at the same time.

(A side note: Undoubtedly, to my mind, the form bears a pathetic existence compared to the novella, whose length—whose matter-of-fact awkwardness—gives it a charm with which to pull people in. The novella has the sensibilities of the short story, but the expansiveness of the novel. Or the other way around. Or it’s a long short story, or a very slim novel. The novella, basically, tricks us by straddling two made-finite-by-tradition forms. It’s the best of both worlds. Well done, novella, four for you.)

Yes, approaching the short story—reading it, writing it, seeing it in a bookstore and wondering if one should buy it—requires a specialized sensibility. One that takes into account length, degree of expansiveness or concentration, its standing amid a pre-packaged collective, and the fact that it’s not a novel. What the hell do you do with a short story anyway? (The answer, forevermore in Sasha Land: You deal with it.)

(Another question I pose to The Great Literary Tradition: Where we ever comfortable talking about a single short story as one would talk about a novel or a novella or a poem? I suppose marketing has a hand in this: Who sells individual short stories? Give the public some heft, by Jove. But how would the greater discourse be if we figure this out? Lots of blogs out there dissect short fiction piecemeal, and rightly so. Maybe we’re wrong to be critical of short stories lumped together. Maybe we should just hold them up against the light, one by one, with the care, energy, and attention they demand.)

And in that parenthetical, I suppose, is why I’m mad about short stories. I mean, what I love about the form is precisely what constrains it: Its specificity, and the care it insists on drawing from both the writer who writes it and the reader who reads it, thinking, “What the hell did I get myself into and why is it so satisfying?” It’s an intellectual and emotional challenge for both roles. It’s something to admire. It manages to sprawl through careful distillation and painstakingly administered revelations; it succeeds by navigating through the morass that is language, by employing the narrative-as-ethics of the essay, by caring for the character as deeply (and sometimes, in a better, more clever way) as the novel which has built itself up by its raison d’être of championing humanity despite the occasional foibles that can make humanity so sucky.

And its range, its hair-tearing range, despite the little-engine-that-could character that’s been pushed toward it (one that I know I’m doing, too, in this post that’s gotten way out of hand)! There are tricksters like Lydia Davis, who type up an elaborate sentence as a title and an add-on phrase as the text body itself. There are the gruff macho men that startle you with tenderness, as with Raymond Carver and Richard Yates. There are the doyennes, whom one can imagine to calmly sip tea at their porches as they excruciatingly yet gracefully cram whole lifetimes into twenty-pagers—like Alice Munro, who else? There are the girls with the chip on their shoulders, like Lorrie Moore; there are those who dissent either through twee-poignancy or false bravado, like Miranda July or Joan Silber or Simon Van Booy (this seems to be in vogue these days). There are the short story writers no one reads—like Harold Brodkey or Wilfrido Nolledo. And then there’s Chekhov. (Hah.)

And yet, what I can hate about the form is precisely that specialized sensibility it will always demand from me. I am, for example, a reader who prefers to polish off books in one sitting, a reader who wants to be devoured by sweeping tales or the emotional grip of volume and heft. And I am an impatient reader—and contrary to how the short story’s been touted for our ilk: Having me sit down with something, only to know that it will end too soon, sends alarms of deep and abiding frustration within me, too.

Yeah, I’m a confused duck. That I’m reading short stories at all—that I can pledge by them—is probably enough of an indication. But fuck me, right, short fiction? (Short fiction grumbles in response; it’s getting grumpy. It does that, in my head, especially when it sees that I’ve tangled myself in circular arguments. Right now, it’s barking at me to git and get off its goddamned property.)

The thing is, children: The short story will persist, and our attitude toward it will endure. The novel may die, resurge, die again, get resurrected endlessly by its legion detractors and champions; the essay will toy with medium and length and preoccupation and ethical standards; the novella will always be the special little snowflake it’s grown comfortably into; poetry will keep curdling our blood with its beauty, its inscrutability, and its conceit that it’s the best form for thought-and-soul that ever will be. And the short story will be in a corner, nursing a warmed beer, brooding over an overflowing ashtray, trying so obviously and awkwardly not to meet anyone’s eye for fear that it might seem too needy—and it’ll be there in that complicated metaphor of a corner forever. And, kids—we’ll all just have to deal with it.

74 thoughts on “Short fiction, or bust”