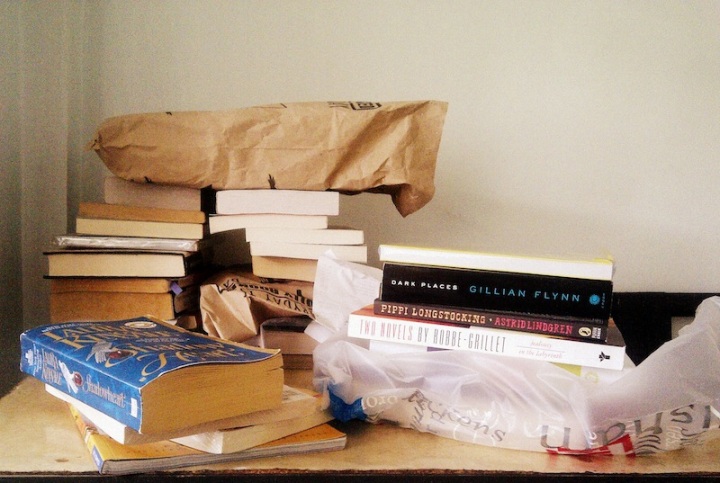 Why, hello there. No: I’m not going to do that thing that’s been happening too often here lately—that thing with the sheepish apology for not having updated in a long time; followed the token blame game on the myriad clusterfucks Real Life has thrown my way; all hastily—lest you think I’ve been a completely useless human being—brought to a close by the reassurance that there has been reading happening up in The Fortress of Solitude.

I’ll just stick to the very last bit. Right. So. There has been reading—the kind of reading that simply passes one’s time, the kind of reading you take in for the sake of taking something in, and then the kind of reading that just feels like it fell into place for you at the best possible moment, the kind of reading that makes you so damned relieved you have reading as a respite. (Fine, then: The feel of the whole reading thing has been alarmingly not unlike shaving off an hour or two out from your hectic schedule to take a cross-metropolis trip to see your piece on the side. Reading’s become my querida these past several months—and although my black, illicit-loving heart squeals at the metaphor, the rest of me that’s chomping at the bit to tell the world that it can go fuck itself so it might leave me alone to read, well, that bit aches.) Even if it kills me, I’ll get around to talking what follows at length—I do miss writing here, putting the reading on record and understanding the book’s everything that way—but for now, here’s a quick rundown of the amazing things in the Read pile:

1 • Books it’s way overdue for me to talk about: Philip Pullman’s His Dark Materials trilogy, which I’ve previously described as “nothing short of a revelation”—and I suspect that part of it is because I’m enjoying being submerged in someone’s confidently built world, and basking in the awe and wonder and intelligence and logic in it. (See my odes to Stephen King’s The Dark Tower opus, for some rabid squee-ing along these lines.) And, also, Cheryl Stayed’s almost universally adored Dear Sugar, which hit me like the proverbial sledgehammer when I first read it—but, worse, I’ve discovered has resonated in me. That is: Whenever I’m set to make a terrible decision, or whenever I feel relentlessly despairing (usually because of a terrible decision), Sugar’s I-love-you-but-there’s-no-bullshit-here words plays on loop in my head. Oh, and even farther back: Nathan Englander’s short stories, What We Talk About When We Talk About Anne Frank, which is seriously one of the best collections of short fiction I’ve ever read. I feel like I’ve been doing it a disservice by not talking about it—I need to proclaim its awesomeness.

2 • Books I’ve read fairly recently, which means I’ve had a little bibliophilic hand to hold through the shitstorms of the past couple of weeks. Off the top of my head: Rainbow Rowell’s Eleanor and Park, which is as good as everyone’s claimed it to be (so let’s ignore the fact that I cried at page 76 because someone slipped his hand against someone’s palm); Gillian Flynn’s Sharp Objects, which is about one of the most fucked up families I’ve ever read (V.C. Andrews, is that you?); Stephen King’s Joyland, which was one of the most enjoyable Steves I’ve ever read (and that is saying a lot, I know); and, hell and damnation, Haruki Murakami’s Norwegian Wood—there could not be a better, more perfected alignment of circumstances—how I came to read it and why and for whom, and how I feel now and how I’ve felt the past two months and how I’ll feel in the days and days to come (and then, of course, again: for whom)—for me and this book to have gotten along. For this book to matter as much as it does now. Augh.

3 • And then, the books that have joined my To Read pile in the past months—dammit, the photo is but a smidgen—and that I cannot wait to read, if only Real Life gets with the program. Fine: I’ve bought 107 books, thus far, this year. The way things have been going, there will never be enough time to (at the very least) make a considerable dent on my to-read list. The world cannot quite calm itself for my reading just yet. The guilt weighs—my grocery list goes neglected for weeks at a time, the electric company comes knocking on my door—but but but: Bookstores are all about the goddamned possibilities. There’s a lot of hope-kindling going on, and I’ve been very badly in need of some kindly hope. Even if it’s for something like, say, being that girl who’d tell Real Life it can go fuck itself because reading needs to be done.

Right. Now I have no idea what to do with myself.