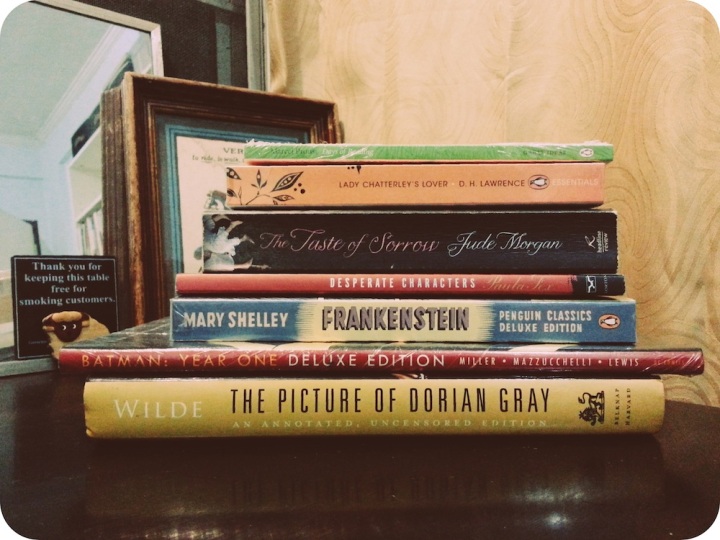 Am really thankful to Ana and Iris for launching Long-Awaited Reads Month again for this year—because there’s nothing like kicking off the year burdened with glorious bibliophilic purpose. I’m enamored by the whole point of the project—to read that book you’ve always told yourself you’d read, that book you’ve always wondered about, or that book that’s been on your shelves forever. It’s a great push, too, and there’s an added weight—a kind of optimism—attached to every #LARMonth read under your belt. Last year’s project, for example, had me finally beginning Stephen King’s Dark Tower series—and I spent the rest of the year reading all seven fat books, and my 2013-in-reading was all the better for it. I’m looking forward to much of the same this year.

No pressure, of course, Sasha. None at all.

There’s an obvious bent to the books above, taken collectively: They’re classics—established or contemporary—that I’ve always felt were up my alley, but just never got around to reading. Other books happened, I guess. But the book stack above are among those I will read this January. Other books can continue to happen, but these books are going to be right there with them. [Although, crap, I’m just seeing it: I’ve read The Picture of Dorian Gray a very, very long time ago—and count it as among my favorite books. I’ve always wanted to reread it, and this annotated edition is absolutely gorgeous, but what in baby ducks’ name is it doing in the #LARMonth stack?] [Edit: Links to posts added.]

Five books set for Long-Awaited Read Month, then. (Oh, and I thought of reading Diana Gabaldon’s Outlander, because it’s really something I should have read at, say, ten years old—but have you guys seen how thick that solid block of a book is?) (I also thought of dedicating the whole of January to read nothing but books I’ve wanted to read for ages—but you know how skilled I am at flaking out of things I set for myself.)

On a less glib note. I read 150 books in 2013, and I fought tooth and nail to read every one of those books. I stayed up late, I procrastinated with Real Life duties, I got jostled in train rides because my hands were occupied cradling a book, my back tormented me because of all the cumbersome books I carried around with me, I skipped meals, I ignored people, I stayed in my room during house parties, I fled to cafés and locked myself in my room, I toiled. I worked to read those books in 2013, and this 2014 I am looking forward to doing pretty much the same thing. I know my priorities, after all: Books are one of the few things that have kept me going—some days, I wake up precisely to finish reading a book I’d slept on—and I know this, and I’m willing to do everything I can to keep on doing so. Please, 2014, and thank you.