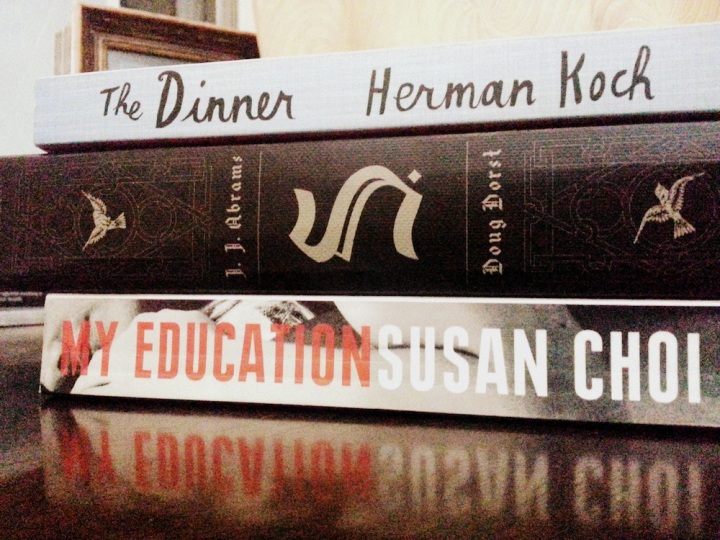 I’ve kept up the wonky momentum of January—characterized by good books and really good books resolving to nudge away a smattering of meh books—up until the start of February, but I’m seeing the possibility of even that faulty system flagging. This is, I am aware, an as-faulty observation—since three of the four books I’ve read since the month began were really, really good books. It’s only that, I suppose, I’ve more recently been mired in books I can’t bring myself to care for—books that I have been excited for, and books that would really be for me if some secret thing inside me wasn’t so listless lately. I look at my bookshelves and think horrible thoughts, among them: How can I be so drawn to all of you, but nothing at this moment appeals?

Then again, here’s an assertion of David Shields [from How Literature Saved My Life] that I fully agree with, but really ought to put into practice: “I don’t want to read out of duty. There are hundreds of books in the history of the world that I love to death. I’m trying to stay awake and not bored and not rote. I’m trying to save my life.”

See, a handful of books, in particular, may have caused the restless bookish gloom. Foremost is Herman Koch’s The Dinner [translated from the Dutch by Sam Garrett], which I’ve been trying to slog through for the better part of the week. And I am only at page 62. It’s so difficult to get through all the food and the etiquette and the false faces—which is, I think, the point of the book. That people who care not for each other and quite possibly loathe each other should, because of convention and social niceties and the need to keep up appearances, sit down for dinner. It’s something I detest in real life, and it’s just as awkward and painful and embittering reading it in a book.

Alan Bowden, though, has this wonderfully written review that has shamed me into giving this another go, if only at least until the hundredth-page mark, haha. I get what The Dinner is trying to do—especially regarding false faces that eventually (inevitably!) crumble and/or that are willfully slipped off, or, at the very least, the undercurrent of not-so-nice beneath the politesse. On the other hand, Max Cairnduff’s comment in Bowden’s piece had me nodding despairingly—is that all there is to it? If so, couldn’t that single force have been delivered with variation in tone or in style?

I demand to be engaged—lately, quieter books have been lost on me. I’ve mentioned my resolve to save The Taste for Sorrow for when I am still enough for it, because I wanted to read it and enjoy it so badly I couldn’t let even myself get in the way.

On the other hand, there’s my protracted, rationed-out time with Susan Choi’s My Education—the reading of which is, in many ways, pretty much tracks how my tastes have changed not only in these curiously listless times but over the years. I would have carried My Education around as a proxy Bible back in college—because here was a book on desire and longing a young woman was loath to keep in. Here was a young woman to whom sex unfurled starting from one weighty, breathless encounter in the dark—and her story’s told in prose so rich and self-indulgent, so languid and hazy and occasionally violent with its ardor. This had Sasha-at-seventeen written all over it.

But me-me-now couldn’t take it in large doses, in long sittings—it was a book that was kept near at hand on my desk, to be read for as long as the cup of coffee lasted, or for when I waited for mail I’d been told would come, or for when dinner was ready but I needed more time and perhaps just one cigarette. It exhausted me otherwise.

But I’m glad the Choi is out of the way—we’ve had our run, and it’s impressed me even if it couldn’t wholly engage me—but it’s read, and I feel better for the accomplishment. That’s what work-free [hurhurhur] weekends are for, I’ve found. On the rare, sweet hours to myself, I sit down with the books I’ve neglected and commit myself to them for as long as the reading lasts.  And so this Sunday afternoon, I returned to S.—for the sole purpose of guiltlessly giving up on it. It’s been with me for close to three months; and anything that’s been on my Currently Reading pile—and sans any discernible movement to speak of—makes a restless, embittered nitwit out of me.

But long before today, my infatuation with the book had fizzled—the intrigue was gone, because I all-too-quickly knew what it wanted to do with me. And that, even after I’d discovered how it dispensed its mysteries—the reader is never part of it; it’s just Eric and Jen working out a problem in the margins of a book, a problem and the finding-of-the-solution to which will never be accessed directly by the reader. Sure, it remains a fascinating, innovative Object—I will always love how it feels like a book that’s been lived in—but, then again, its narrative has always been its greatest flaw. And I’m going to read it now, and suffer that narrative, and recall what enthrallment it had over me—and then I’m going to put it back on my shelves. That’s how it goes.

Right. To ward off the gloom and doom: I’m looking forward to thinking about and working out my thoughts on those good books of February-thus far: There’s David Shields, which naturally poses a challenge, damn its lofty hide; there’s Chabon’s pastiche on Sherlock Holmes, so I have to work on toning down the squeals; there’s Ed Brubaker’s building of the Joker mythos, and again with the squealing. And then there are the books I’m actually looking forward to reading—if I ignore the coming-workweek blues of But there’s nothing I can possibly read; I’ll find my stillness again, I’ll figure it out. We’ll see. It’s early days yet, isn’t it? And so: Until later, dear Ether.